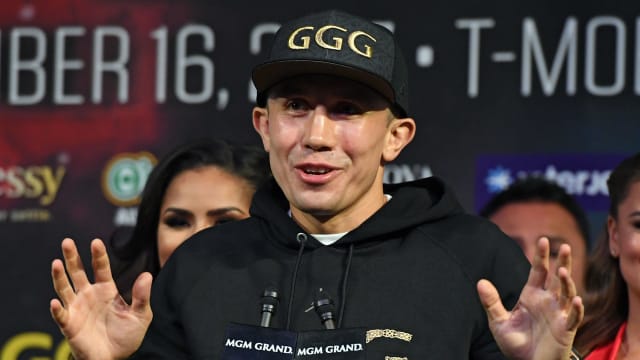 Gennady Golovkin may have won all 37 of his fights as a professional boxer, but he still does not love the sport.

The undefeated Golovkin will put his WBC, WBA, IBF and IBO middleweight belts on the line on Saturday when he takes on Saul 'Canelo' Alvarez at T-Mobile Arena in Las Vegas.

The Kazakh has established himself as the dominant force in the division and is two fights away from matching the record of 20 successful title defences at the weight set by the legendary Bernard Hopkins.

However, Golovkin maintains a clinical view of boxing, admitting he by no means has an unbounded passion for the sport.

"I still don't love boxing. It's my job, it's my life. I am a fan of boxing. But I don't love this," he wrote in an article published on The Players' Tribune.

"You've seen fights. Who could love a thing so brutal? But I am good at boxing. It is my job and I work hard. Easy money. I love my team. I love my life.

"And I know the boxer that I need to be. I know that I have to become GGG. But I don't love that.

"I love my family. I love my wife, Alina. I love my son, Vadim. And I love our new baby girl, who was born this week."

Golovkin makes a distinction between the family man and 'GGG' - the persona he adopts when he steps into the ring and becomes "like a shark in the ocean".

If you go in the ocean, the shark knows. He's home. It's the same for me in the ring ... Let's do it. pic.twitter.com/usAsGodGe4

"Every time, before every big fight, my body remembers what to do," he wrote.

"And it's no different this week, before I face Canelo Alvarez on Saturday night. Each day before the fight, it gets bigger. Bigger and bigger. Until fight night. That's when Gennady Golovkin becomes GGG in the ring.

"It's been happening again, these last few months, up at our camp in Big Bear, California. Gennady to GGG. As I get ready to fight Canelo, what people say is the biggest fight of my career, my body, my mind are both getting ready to step into the ring.

"And when I do, it is like a shark in the ocean. If you go in the ocean, the shark knows. He's home. It's the same for me in the ring."