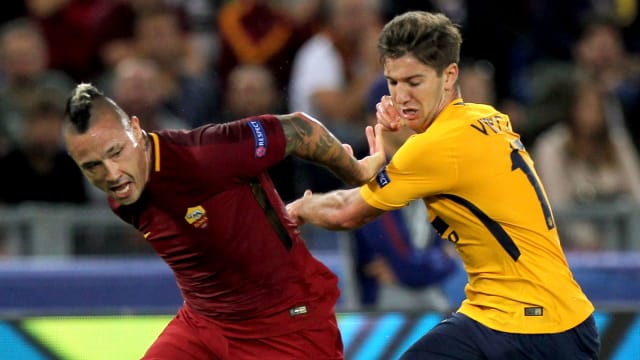 Roma ground out a 0-0 draw against Atletico Madrid to give coach Eusebio Di Francesco a point from his first Champions League game at the Stadio Olimpico.

The Giallorossi spent much of the evening on the back foot as the experienced European campaigners in Diego Simeone's Atletico squad piled on the pressure, but Di Francesco was at least given a clean sheet to build on at the start of his debut season as a coach in Europe's top club competition.

The home crowd were demanding after a 3-1 home defeat to Inter in Roma's last competitive fixture but Atletico pinned their hosts back for long periods of the game and cancelled out the threat posed by dangerman Edin Dzeko.

Radja Nainggolan was one of few Roma players to emerge with credit after a busy performance and a first-half shot that was saved by Atletico goalkeeper Jan Oblak at full stretch.

Simeone's men will rue their wastefulness in front of goal after Saul Niguez missed golden opportunities to score in either half and Koke had a first-half attempt cleared off the line, but on the evidence of this game it is the Spaniards who look like the sternest test awaiting Group C's other sides, Chelsea and Qarabag.

Saul gave the hosts a scare after three minutes when he was played in by Filipe Luis and flashed a first-time shot from the edge of the box just past the post.

Roma looked fragile at the back as Atletico pressed early on, with Saul pulling the strings for the visitors, and Luciano Vietto stung the palms of Giallorossi goalkeeper Alisson with a powerful shot from the edge of the box after 15 minutes.

As the home crowd looked to Nainggolan for inspiration, the Belgium midfielder responded with a defence-splitting pass to Gregoire Defrel but the Sassuolo loanee snatched at his shot and sent the ball wide after 17 minutes.

Diego Perotti sailed a dipping drive over the crossbar from 25 yards just before the half-hour mark, and the game then burst into life.

Nainggolan hammered a low drive towards goal that almost squirmed under the body of Oblak, before play swung to the other end of the field where Roma's Kostas Manolas had to scramble back to clear Koke's shot off the goal-line.

No goals yet in this one - but plenty of chances from both sides!#ASRoma#UCL#RomaAtletipic.twitter.com/F0Whj3zkgj

Atletico attacked early in the second half and after 56 minutes Saul played a superb pass to Vietto who scooped the ball over Alisson but the shot had too much power on it and drifted over the crossbar.

Juanfran broke down the right three minutes later and cut the ball back to the edge of the box where Saul met it with a side-footed shot, but he aimed too close to Alisson who gratefully gathered.

Just after the hour mark, Antoine Griezmann played in substitute Angel Correa who drifted through the penalty area before poking the ball towards goal, only for Alisson to parry the ball away with a good one-handed save.

There was a moment of hope around the stadium when Juanfran appeared to bring down Perotti in the penalty area after 75 minutes, but the referee awarded a goal-kick, before, at the other end, Correa drew an excellent save from Alisson with a powerful drive from the edge of the box.

Saul went incredibly close to breaking the deadlock in injury time, crashing a header towards goal from Koke's corner and, when Alisson parried the ball back into his path, his first-time shot hit the outside of the post allowing the stadium to breathe a sigh of relief.