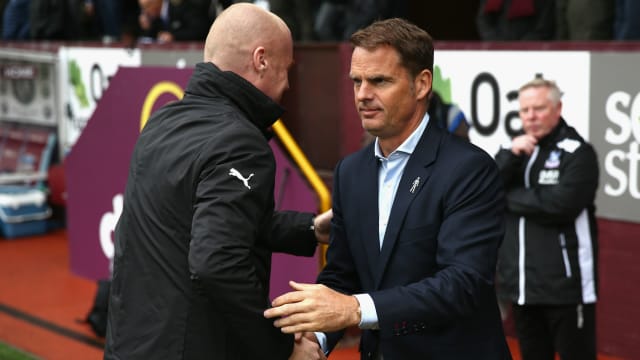 Palace are yet to score this season despite attempting 23 shots in total at Turf Moor, managing five on target compared to Burnley's two, with defender Scott Dann the main culprit for failing to convert a late header from point-blank range.

Dyche considered his side fortunate to escape with three points from "probably the worst performance" of their season so far.

"[Palace] were the better side. They had a couple of very good chances," Dyche told BBC Sport.

"Sometimes it is just not going with you. We had it against West Brom recently where I thought we were excellent and we got nothing.

"We did not get into our stride, ironically, after scoring early. You would think that would help, but I weirdly thought it helped them. They seemed to play well more or less for the game after that.

"Over a season you just hope it balances up."

What a start to his Burnley career for @officialcwood!#TwoinTwopic.twitter.com/JAD1SvdNUk

Dyche also praised the immediate impact of new signing Wood after the striker bagged his second goal in as many matches for Burnley, capitalising on Lee Chung-yong's poor back-pass.

"He wants the challenge of being in the Premier League. I like that about players," the manager said of Wood's mentality.

"That is why we sometimes do recruit from the Championship. You want players with that desire to prove themselves and he certainly looks full of that. And it was a sublime finish."