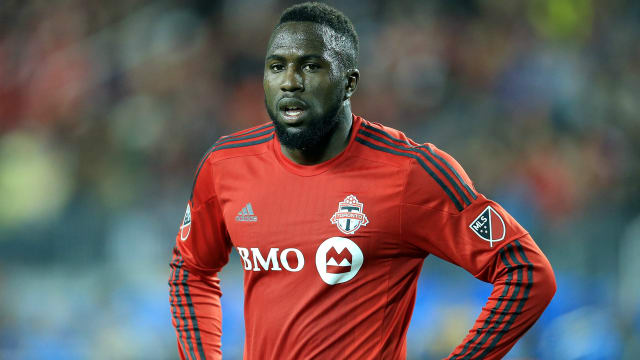 Toronto continued their fine form to secure a place in the MLS play-offs, while Orlando City ended their winless run on Saturday.

A brace from Jozy Altidore helped Eastern Conference leaders Toronto to a 4-0 win at home to the San Jose Earthquakes.

The win was Toronto's fifth straight, and Greg Vanney's men are now assured of a spot in the play-offs.

Victor Vazquez opened the scoring for Toronto in the first half before his pass put Altidore through, the United States international making no mistake with his finish for his 50th MLS goal.

Altidore headed in the hosts' third at BMO Field before Jonathan Osorio struck from 20 yards in the 66th minute.

Making matters worse for the Earthquakes - who are seventh in the Western Conference - Darwin Ceren was sent off.

Orlando City ended an eight-match winless league run with a 2-1 victory at DC United, despite being reduced to nine men.

First-half goals from Cyle Larin and Giles Barnes had Orlando in control before substitute Servando Carrasco was sent off with 11 minutes remaining.

Kofi Opare managed to pull a goal back for DC, but they were beaten despite Orlando going down to nine men when Seb Hines saw red late on.

There it is! The boys take three points thanks to a gritty defensive performance and two goals! #DCvORLpic.twitter.com/ORl1dYkwp9

The Portland Timbers climbed to the top of the Western Conference after a Diego Valeri goal saw them past New York City 1-0.

The Vancouver Whitecaps recorded an entertaining 3-2 win over Real Salt Lake and the Colorado Rapids got past Houston Dynamo 1-0.