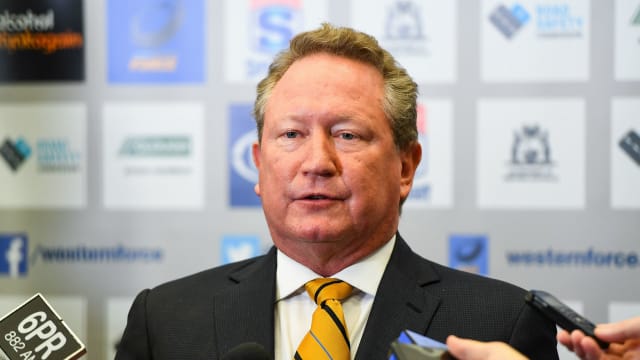 Western Force backer Andrew Forrest announced plans for a new Indo-Pacific tournament after an appeal against their Super Rugby axing was dismissed by the Supreme Court of New South Wales.

The Australian Rugby Union (ARU) announced its intention to cut the Force from the competition, which is being reduced from 18 teams to 15 for next season.

Rugby Western Australia (RugbyWA) contested the decision but their appeal was dismissed on Tuesday, though Forrest stated plans to take the appeal to the next stage were afoot.

However, the billionaire mining magnate revealed his intention to set up a new six-team Indo-Pacific league that will kick off with the Force taking on a national team.

"What I want to announce is the new Western Force and the new game of rugby across the Indo-Pacific," said Forrest.

"We will include strong and deeply powerful players, broadcasters and fans of rugby all across the Indo-Pacific region where some 60 per cent of the world's people live, on our timeframe, right here in Western Australia.

"We will be including in this an international game - and I hope to announce details of that in the next several days - with the Western Force versus a team that will surprise us all.

"I can assure all Western Force players and all rugby supporters across this nation that out of great disappointment comes equal or greater opportunity.

"I can assure all of you that discussions have commenced across the world and within our own state and country to ensure this competition starts and starts strongly and continues strongly."

Forrest confirmed he had not yet approached any of the Force's players about committing to the competition.

ARU president Cameron Clyne suggested Forrest's support for the Perth-based franchise came too late to save them from being culled.

"We've been in constant contact with RugbyWA right through the process," said Clyne. "One of the frustrating things here is that there has been a lot of opportunities for RugbyWA.

"We stepped in there and bailed them out 18 months to two years ago because no one came forward.

"I'm really frustrated and disappointed that there was obviously a desire late in the piece for some support.

"I just don't understand why RugbyWA didn't contact Andrew Forrest in April - this would have been a far different outcome."