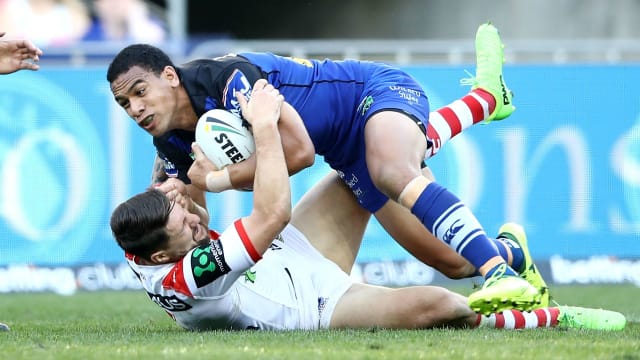 The injury-plagued North Queensland Cowboys will play in the NRL Finals for a seventh year in succession after St George Illawarra Dragons blew their chance to sneak into the top eight on Sunday.

North Queensland's loss to Brisbane Broncos on Thursday meant they were at risk of being knocked out of the top eight in the final round of the regular season.

Yet the Dragons were unable to claim the two points they needed against Canterbury Bulldogs, who won a topsy-turvy encounter 26-20 as Will Hopoate and Michael Lichaa excelled.

Hopoate was involved in each of his side's three first-half tries, the full-back rounding off a sensational move started by Lichaa in between scores for Josh Reynolds - in his final Bulldogs appearance - and Marcelo Montoya.

Having trailed 14-6, the Dragons opened up a six-point lead as Jason Nightingale and Matthew Dufty went over prior to Gareth Widdop kicking his fourth goal in the 63rd minute.

However, Hopoate was not finished and a superb run and offload from the 25-year-old put Aiden Tolman over, before hooker Lichaa scooted over from dummy half for a match-winning try.

Having hung on to their place in the top eight, the Cowboys will face Cronulla Sharks on Sunday, after the defending champions rounded off their regular-season campaign with a 26-18 win over Newcastle Knights.

Manly Sea Eagles take on Penrith Panthers in the other elimination final, while the qualifying finals will pit minor premiers Melbourne Storm against Parramatta Eels and Sydney Roosters against Brisbane Broncos.