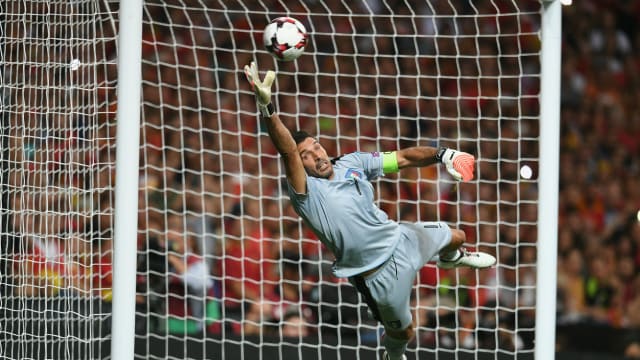 Gianluigi Buffon remains confident Italy will qualify for the 2018 World Cup despite their disappointing 3-0 defeat to Spain in Madrid on Saturday.

The top two sides in Group G went head-to-head at the Santiago Bernabeu in the seventh round of qualification fixtures and it was the 2010 champions who prevailed thanks to Isco and Alvaro Morata.

And Buffon insists they could still secure a place in Russia next year, even if they might have to go through the play-offs.

"We believe and hope to go to the World Cup," Buffon told TMW Radio.

"There is a year ahead of us, there will be training camps to refine certain mechanisms. There are values in this squad that don't always emerge."

| #SpainItaly
The hosts were too strong in Madrid and focus must now turn to Israel as the route to Russia has become more complicated. pic.twitter.com/jri8qfAntZ

Buffon's Juventus team-mate Andrea Barzagli echoed the goalkeeper's confident outlook, and urged everyone involved with the national team to not lose faith.

"It was difficult, we knew that, and the quality of all their [Spain] individual players emerged," he said.

"We needed the perfect performance to limit us. It is a heavy result, but I don't think we suffered that much.

"We mustn't lose faith in our journey, as we still need to do what's necessary to reach the World Cup. We should have done better, however we continue to believe in what we're doing and focus on reaching the play-offs.

"That second place isn't mathematically locked down yet, so the next game with Israel is going to be fundamental. We must prepare and win."