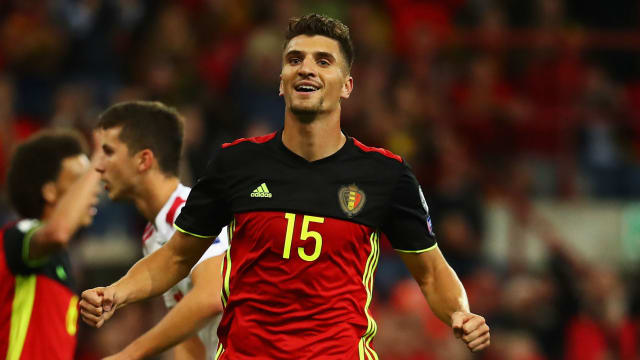 Thomas Meunier and Romelu Lukaku scored hat-tricks and Eden Hazard marked his return to competitive action with a goal as Belgium cemented their place at the top of Group H with a 9-0 demolition of Gibraltar in World Cup qualifying.

Hazard featured in a competitive game for the first time since breaking his ankle while on international duty in June and played 77 minutes as the Red Devils outclassed their part-time opposition from start to finish.

Axel Witsel, who earlier lit up the Stade Maurice Dufrasne with a stunning bicycle-kick, was sent off for going in high and late on Jamie Bosio shortly before the break, but the damage was well and truly done by then with Roberto Martinez's side leading 5-0.

Hazard got in the action on the stroke of half-time before Meunier and Lukaku completed their respective trebles after the restart.

Witsel's dismissal means he will miss Sunday's important trip to Greece, and Gibraltar lost a man of their own when Erin Barnett was dismissed having brought down Kevin De Bruyne to give away a late penalty from which Lukaku slotted home his third.

Gibraltar goalkeeper Deren Ibrahim started impressively, twice denying Lukaku early, but it was his error in the the 15th minute that opened the floodgates.

The England-born shot-stopper let Dries Mertens' tame cross slip between his legs and break the deadlock and right-back Meunier quickly compounded the mistake by tucking Mertens' clever cut-back inside the near post to double the lead.

Lukaku made it three goals in the space of six minutes when Meunier put a right-wing cross on a platter for the Manchester United man.

Witsel fluffed a clear chance in the 23rd minute, but the midfielder produced the highlight of the half moments later. Mertens dinked a clever cross towards the far post and Witsel lashed home spectacularly to make it 4-0.

Meunier teed up Lukaku for the second time in the 38th minute and, despite Witsel capping a mixed half with a straight red card, the Red Devils still pressed forward and added a sixth goal through a Hazard tap-in on the stroke of half-time, the Chelsea star converting Menuier's third assist of the half.

Anything @Cristiano can do...

Lukaku twice spurned chances to complete his treble shortly after the restart, first heading straight at Ibrahim before turning another cross around the post.

Meunier volleyed in Hazard's cross for his second and Belgium's seventh on the hour mark, and the Paris Saint-Germain defender beat Lukaku to a hat-trick with 23 minutes remaining, storming on to a De Bruyne cross at the far post.

The visitors looked to have stemmed the tide until defender Barnett bundled over De Bruyne, Lukaku stepping up to net his third and add further gloss to an emphatic scoreline.