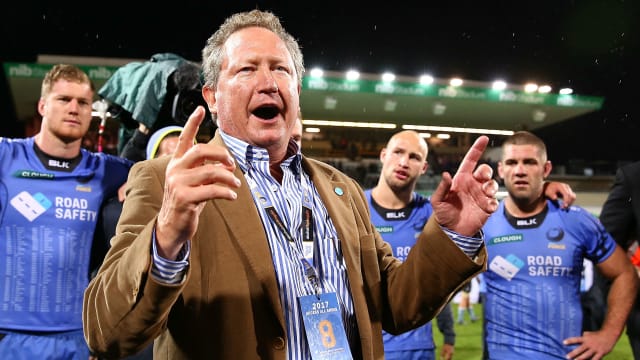 The Australian Rugby Union (ARU) has denied allegations it decided to axe the Western Force from Super Rugby as early as February, in response to the process being labelled as "an ambush" and "a charade".

Earlier this month, the ARU announced the Force would be cut from the competition, along with South African sides the Cheetahs and Southern Kings, to reduce the number of teams from 18 to 15.

The Cheetahs and the Kings have since joined Pro14, but the Force - with the backing of mining billionaire Andrew Forrest - are fighting their case in the courts.

On Wednesday, Forrest spoke to reporters and claimed to have received an ARU document which he alleged was proof the governing body had taken the decision back in February based on legal advice and not for financial or sporting reasons, as the ARU stated.

Mr Andrew Forrest AO made a statement to the media this morning in regards to his current stance on the Australian Super Rugby situation. pic.twitter.com/nuYmr7YM8m

"It's clear now with the document I have received that the Western Force were ambushed," said Forrest, who also called on ARU chairman Cameron Clyne to resign.

"There has been a charade which I think has been inducted onto the Australian sport-loving people.

"It [the document] shows that late in February this year the advice was received and taken to the cut the Western Force for no other reason apart from legal advice.

"Not for merit, but choosing to cut because they [the ARU] could bully a team into submission. I'm here to say you cannot bully this team, your ambush has been sprung, you have been discovered."

"The decision to discontinue the Super Rugby licence of the Western Force was made by the ARU Board on August 11, 2017 and this was communicated publicly immediately when that decision was made," a statement read.

"For the record, RugbyWA has been provided several opportunities to put its best business case for the Western Force to the ARU Board, from April 10 right up until our final request for this information on August 2, 2017.

"Andrew, in his press conference this morning, referred to a document or documents which indicated that a decision had been made to remove the Western Force in February. This was not the case and there are no documents which contain this information."