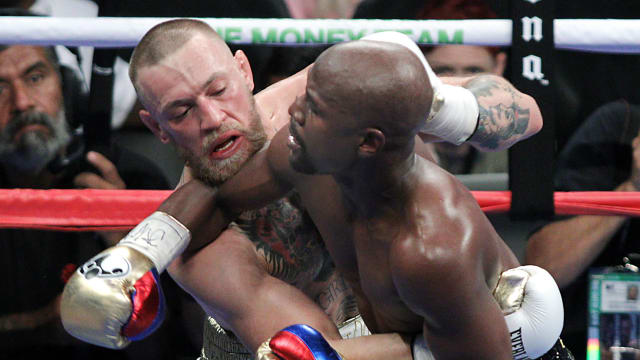 In his first professional boxing bout, UFC star McGregor impressed in the early stages before Mayweather's ring craft and experience came to the fore to earn a 10th-round stoppage in Las Vegas.

McGregor earned plaudits from many pundits for holding his own against a fighter of Mayweather's calibre, with many having predicted the Irishman would be embarrassed by his undefeated opponent.

But Lewis was less than impressed and believes Mayweather's victory shows boxing is superior to mixed martial arts.

"In the beginning, I didn't look at Conor McGregor as a boxer, this guy has never been 12 rounds and he's in there with a professor of boxing," Lewis told BBC Radio 5 live's Sportsweek.

"Floyd took him to school, he made him punch himself out and when he was tired he took him out. It's textbook boxing.

"It shows that boxing is a superior sport. In the ring, you can't beat a boxer, it's not as easy as everybody thought it would be, just because McGregor is a fighter.

"This is fighting where you can only use your hands."

While McGregor weighs up his next move in the fight game, Lewis does not wish to see the Irishman return to the squared circle.

"I didn't see the point of the whole thing," he added.

When asked if he had a message for McGregor, Lewis replied: "Stay in your lane. Boxing is superior."