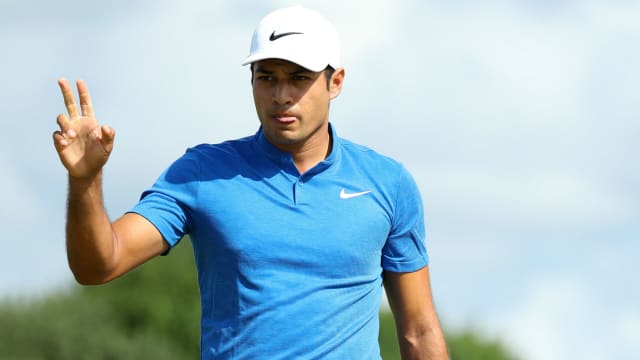 Julian Suri won his first European Tour title after David Horsey faltered in the final round of the Made in Denmark on Sunday.

Horsey started the final round with a two-shot advantage, but it was American Suri who claimed victory by four shots at Himmerland Golf & Spa Resort.

The world number 213 held a one-stroke lead over Horsey at the 18th tee and lifted the trophy courtesy of a par at the last, as Horsey finished with a triple bogey.

Outsider Suri finished the week on 19 under to join Brooks Koepka and Peter Uihlein as the only Americans to have won on the European Tour and Challenge Tour, three months after he was crowned D+D REAL Czech Challenge champion.

"Feelings like this make all the hard work worthwhile." pic.twitter.com/wBIik5ElVC

Playing only his seventh European Tour event Suri, who began the day second on the leaderboard, hit the front with his second birdie of the day at the third after Horsey started with a bogey.

Suri went out in 31 following another two birdies, but two gains in as many holes from the Englishman brought him level heading to the 13th.

It was advantage Suri again when he sunk a sublime birdie putt at 15 and he clung on to his lead, winning by a clear margin after Horsey made a mess of the 18th.

"To have seven birdies and be bogey-free in the final round was really solid. I'm pretty proud of that," Suri said.

"I feel like my game belongs at the top of the game. This is definitely something I've worked for and kind of expected for a long time.

"But to finally come out and do it, especially after the string of good finishes this summer, is really special."