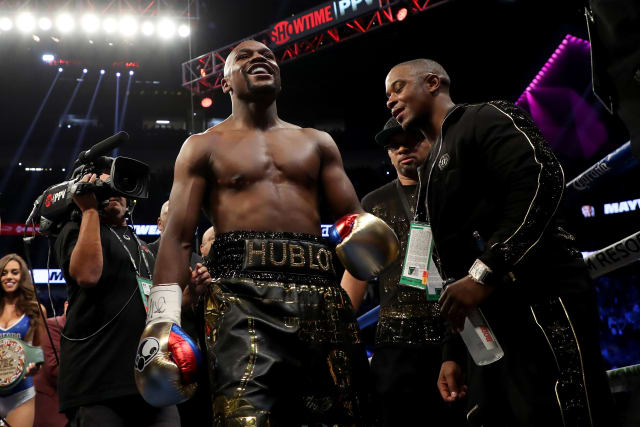 Before a punch had even been thrown in Floyd Mayweather Jr and Conor McGregor's fight for the ages, we were led to believe that boxing's reputation could be headed for irrevocable damage.

The bout was written off by many in boxing circles as little more than a circus, just another stage show amid the glitz, glamour and blindingly bright lights of the Las Vegas Boulevard.

There was almost an arrogance about the way McGregor was discounted. How dare this loudmouth upstart from UFC - so often considered boxing's barbaric, insignificant cousin - try and clinch a sizeable piece of a lucrative pie?

McGregor, it was said, would be wildly out of his depth. A boxing novice with no previous professional fights in the squared circle would simply be outclassed by one of the sport's all-time greats.

There was fear, too. Amid all the assuredness, all the certainties that Mayweather could not lose, there was still that nagging doubt. What if? Just what if McGregor could deliver on his promise to shock the world, to do what 49 others had tried and failed to do, to become - as he put it - a boxing 'God'?

For three rounds of an unexpectedly exhilarating contest, those fears only grew as McGregor laughed in the face of his critics.

"I'm so proud of Conor." @DanaWhite reflects on #MayweatherMcGregorpic.twitter.com/53ecgXT7lG

The unorthodox style and the changing of stances had Mayweather initially baffled.

In those early exchanges, McGregor looked every bit an assured boxer. The footwork was nimble, he worked the jab and he dodged well.

And then, with a certain air of inevitability the Irishman tired. The high-octane offense dwindled and the expected Mayweather masterclass came to fruition.

It could not have been more timely either.

Mayweather had far more riding on this fight than McGregor. He was, after all, the overwhelming favourite and a man that has crafted his 'The Best Ever' mantra on years of defensive skill, quick hands and unmatched ring craft.

Had he lost this fight, that incredible legacy would have been left in tatters.

As it was, the complacency he showed in the early rounds was quickly forgotten. Mayweather found his range, the shots began to land and when McGregor was on the ropes in the 10th - having staggered his way to surviving an onslaught in the ninth - the writing was on the wall.

With victory, that incredible legacy will live on untarnished and, despite the pre-fight talk, Mayweather has a legitimate bookend for a 50-0 career that sees him usurp the great Rocky Marciano.

History has been made. 50-0! #MayweatherMcGregorpic.twitter.com/mBKtbeNxHt

But while the history books will show McGregor was beaten, the Irishman left the ring with his head held high and with a moral victory to boot.

He stood his ground in a fight where few had offered him hope of doing so.

McGregor will be presented with a wealth of options, there will be no shortage of takers in boxing or UFC keen for a lucrative payday and a share of the world-wide limelight he brings to all his fights.

But more importantly, he walks away with an untarnished reputation. So does Floyd Mayweather, and so does boxing.