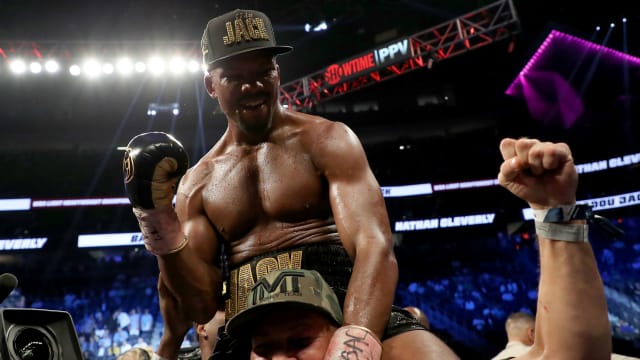 Swedish fighter Jack stepped up in weight to challenge Cleverly, but looked completely at home after moving up from 168lbs and stopped the Welshman in round five to become a two-weight world champion at the T-Mobile Arena.

Cleverly started well in the opening round before Jack asserted his dominance in the second with a series of left hooks.

Jack drew blood with some relentless pressure in the fourth and the referee was forced to step in during the next round with Cleverly struggling against the ropes.

Davis, who failed to make weight for his super-featherweight clash with Francisco Fonseca and was stripped of his IBF world title, was awarded a contentious knockout victory in round eight.

The unbeaten American, who made his way to the ring with a questionable blue hat, was involved in a slug fest with Fonseca before catching his opponent seemingly with a shot to the back of the Costa Rican's head.

Fonseca was counted out and the announcement of a Davis victory was met with a chorus of boos.

Andrew Tabiti was on another level as he dominated former cruiserweight world champion Steve Cunningham, scoring a 100-90 decision on one of the judges' scorecards.

The 27-year-old, who is now unbeaten in 15 professional fights, was too quick for his aging opponent and worked the right hand to good effect, while showing good movement to evade his opponent's strikes.

Savannah Marshall breezed through her professional debut as the Briton earned a decision victory over Sydney LeBlanc, while Antonio Hernandez won an entertaining contest with Kevin Newman.