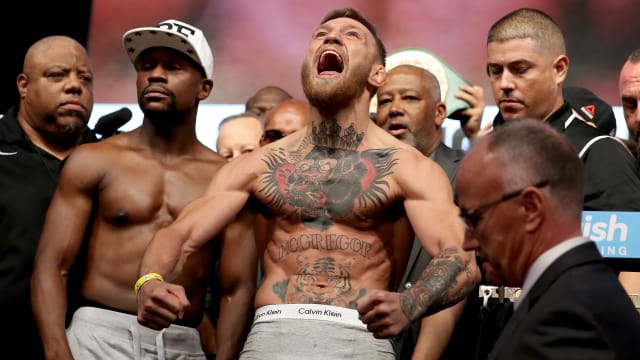 And McGregor did not waste his last opportunity to trash talk his unbeaten opponent before Saturday's blockbuster showdown.

After 40-year-old Mayweather - who is putting his flawless 49-0 boxing record on the line - weighed in well below the 154-pound limit at 3.5lbs lighter, UFC star McGregor took centre stage in front of a pro-Irish crowd at T-Mobile Arena.

As the pair went nose-to-nose, McGregor barked and shouted at his highly-fancied American opponent, much to the delight of his adoring fans.

THE FINAL FACE OFF OH MY LORD TOMORROW NIGHT WILL BE EPIC!!!!!! #MayweatherMcGregor#ConorMcGregor#FloydMayweatherpic.twitter.com/SWtRSdtOqJ