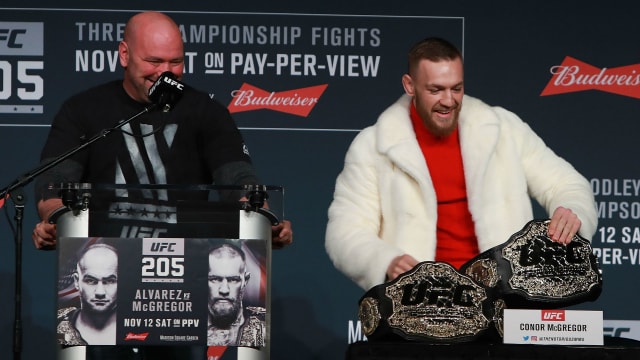 As Conor McGregor and Floyd Mayweather Jr enter the final stretch of preparations for their Las Vegas megafight, a prevailing question remains: Why on Earth is one of boxing's all-time greats putting his legacy on the line against a champion from UFC?

There may well be eight, perhaps nine-figure factors at play, but even they are indicative of the fact that mixed martial arts is no longer boxing's nefarious and forgettable cousin. The UFC is now the single most recognisable fight-sport brand on the planet.

So how did a company once branded as pedalling "human cockfighting" by former US Presidential candidate John McCain become a pay-per-view sensation ready to muscle in on boxing's prestigious territory?

We take a look at UFC, from its early days of no-holds-barred brutality to the silver-slicked entertainment juggernaut of today which has allowed McGregor his shot at #TBE...

THE BIRTH OF UFC... AS WE KNOW IT TODAY

There were numerous golden moments in boxing in 2001: Bernard Hopkins' career-defining uniting of the middleweight titles against Felix Trinidad, Lennox Lewis and Hasim Rahman's year-long, two-bout battle over the WBC and IBF heavyweight titles and featherweight showman Naseem Hamed having his crown taken by Marco Antonio Barrera.

UFC held just five events through all of 2001 (five per month is the current standard) and UFC 33 in September of that year is remembered as one of the worst shows in the company's history thanks to a gruelling main card that saw each title bout go the distance.

However, a monumental shift had already been made in the business, and the fact that that event took place under jurisdiction of the Nevada State Athletic Commission was a huge step forward from the unsanctioned shemozzle of UFC's early years when sumo wrestlers were pitted against savate fighters and a grappler would meet a boxer in tournaments to discover which fighting style was the best. (What irony that a return to such guess-work grandstanding has put UFC in front of the world...)

Dana White and the Fertitta brothers, Lorenzo and Frank, had taken control of UFC after striking a $2million deal and began changing its perception from an extreme sport to a complete one, as well as making inroads into the PPV market while trying to find a way to truly break into the mainstream...

It wasn't the main-card stars of the day that catapulted UFC into wider consciousness back in 2005, rather it was 16 wannabes who were out for a piece of the action.

Catch up on your @UltimateFighter history before the premiere tomorrow. pic.twitter.com/a7Y8igD1wD

The Ultimate Fighter was a reality-television hit, pitting teams of middleweights and light heavyweights against each other, with a UFC deal on the line and octagon icons Chuck Liddell and Randy Couture coaching the rookies.

Crucially, TUF was beamed into millions of homes via cable TV - introducing the human side of what most had previously assumed was an inhumane bloodsport.

With a previously untapped audience now turned onto the competitive honour, the incredible levels of skill and dedication, and the thrill of MMA, UFC have not looked back.

The show not only made stars in the octagon, but also made White a leading light in UFC's narrative as the tough-talking president played a part-executive, part-fanatic role to perfection - a character trait that has re-emerged in the Mayweather-McGregor preamble.

HOW UFC HAS - AND STILL COULD - CHANGE BOXING

With the disorganised chaos eradicated, a mainstream relevance established and star names emerging, UFC has only continued an upward trend over the last decade.

A ground-breaking, estimated $100million-per-year TV deal in 2011 led to more UFC shows being put on, and more of them being made available to a wider audience. McGregor made his UFC debut at one such event in Stockholm, surgically defeating Marcus Brimage in a little over a minute.

The continued flow of UFC into more and more homes has opened eyes onto the differences between MMA and boxing that perhaps make the latter look the more archaic game.

MMA has made stars of women in a way that boxing appears reticent to do so. Ronda Rousey is not only the biggest female combat star in history, but possibly the most recognisable UFC fighter of all time.

#OnThisDay in UFC history - @RondaRousey added to her legacy with THIS first-round KO pic.twitter.com/inv32VhQNE

The former bantamweight queen's level of cross-over popularity has been unmatched by any man, perhaps until now by McGregor, and her 2015 main-event defeat at the hands of Holly Holm in Melbourne, Australia remains the best-attended UFC event in history. By contrast, female boxing stars scrap for undercard slots, regardless of their star power.

The Olympic history-maker Nicola Adams is a British icon after defending her gold medal at flyweight in Rio, but her two subsequent pro fights have come under a man's main-event banner. Another Olympic champion, Katie Taylor, has a 6-0 professional record, but fights almost exclusively on the undercard of major British bouts between men. A large audience, yes - but not her show.

Some of the cards that Taylor has fought on offer another glimpse of how boxing has had to respond to another of the UFC's biggest holds over it.

Joshua-Klitschko, Ward-Kovalev and the upcoming Golovkin-Alvarez are epics that were not hampered by the same filibustering nonsense that left boxing fans lamenting the arrival of the Mayweather-Pacquiao 'Fight of the Century' a few too many years too late.

Mayweather's reputation as a champion that chose fights that would guarantee his reign's prolongation is something that is not allowed to follow a UFC fighter. As employees of the company, a champion will defend his belt against an opponent selected for him.

Demetrious Johnson is another UFC champion who earns the title. 'Mighty Mouse' is the only man to have ever held gold in UFC's flyweight division - having won its first title bout and then defended his belt 10 times in under four and a half years.

Light heavyweight star Jon Jones targeted a fight with former heavyweight champion and professional wrestling star Brock Lesnar - having cited Mayweather-McGregor as his inspiration - but the 30-year-old's failed drug test in the week of the Las Vegas extravaganza has left MMA with a cloud hanging over its moment on the world stage.

In barely two years, McGregor has vaulted himself from a champion cage-fighter to UFC record-breaker and pop-culture phenomenon.

Paul Pogba, Marc Gasol and Kiko Alonso were just some of the stars that have brought The Notorious' 'billionaire strut' to the globe's biggest sporting competitions - a celebration brought to global attention as McGregor added lightweight gold to his featherweight title by beating Eddie Alvarez in November 2016.

Though McGregor has only ever been aping WWE owner Vince McMahon's famous gait, even Justin Bieber has gotten in on the act to prove just how embedded the Irishman is in the millennial society's mindset.

Veratile @justinbieber shows off mad #SkillsFCB with @Rafinha & @NeymarJr both on attack and in goal! pic.twitter.com/bhUit7BWVq

The world of fight sports has rarely seen a man so capable of dominating the global conscience since Muhammad Ali. Whether it is for McGregor's skills as a competitor, or as 'The Greatest' for getting tongues wagging with his rhetoric.

Whether he leaves Las Vegas as a winner or not, McGregor is a global marvel and the UFC will pick up where it left off on its seeming ceaseless clamber with him.

In May 2017, as rumours of this most unlikely of events began to intensify, the Fertitta brothers sold UFC for $4billion - a 2000-time mark-up on their investment 17 years previously.

Such growth, and this event is proof of the strides MMA has taken in drawing level with boxing. A shock McGregor win - the magnitude of which is almost unthinkable - could be the beginning of the balance in power shifting for good.