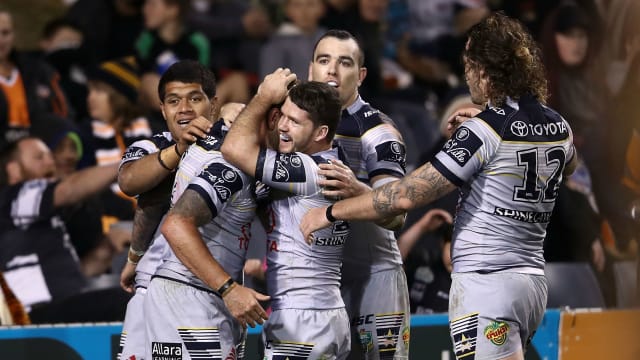 North Queensland Cowboys ended a four-match losing streak with a 22-14 win at Wests Tigers to stand on the brink of the NRL finals, while Canberra Raiders look set to miss out, despite beating Newcastle Knights.

Kyle Feldt scored two tries in as many minutes for the injury-hit Cowboys, who raised their game in the second half at Campbelltown Stadium on Friday to secure a first victory in over a month.

Paul Green's men will have a top-eight spot in the bag by the time they face New Zealand Warriors in the last match of the regular season next weekend if St George Illawarra Dragons fail to beat Penrith Panthers on Sunday.

Aaron Woods sold a dummy to burst through for the opening try and the Tigers led 10-6 at the break after Josh Aloiai crashed over following a converted Te Maire Martin score.

The alarm bells were ringing for the Cowboys when Malakai Watene Zelezniak finished a slick move on the left for a try which Tuimoala Lolohea was unable to convert, rattling the post with a conversion attempt for the second time in the match.

North Queensland rallied from 14-6 down to claim a much-needed win, though, Feldt bagging a quickfire double and Michael Morgan adding another after taking a clever kick from Jake Granville.

Jordan Rapana scored a hat-trick in the Raiders' 46-28 win over the Knights at GIO Stadium, but Canberra really needed a favour from Wests later in the day.

Rapana finished on the stroke of half-time and completed his treble after the break, while the influential Jarrod Croker scored one of seven Raiders tries and amassed 18 points from the tee as the bottom side were soundly beaten despite a Shaun Kenny-Dowall double.

The Raiders are unable to catch the Cowboys and will be out of contention for a finals berth if Manly Sea Eagles avoid defeat against the Warriors on Sunday.