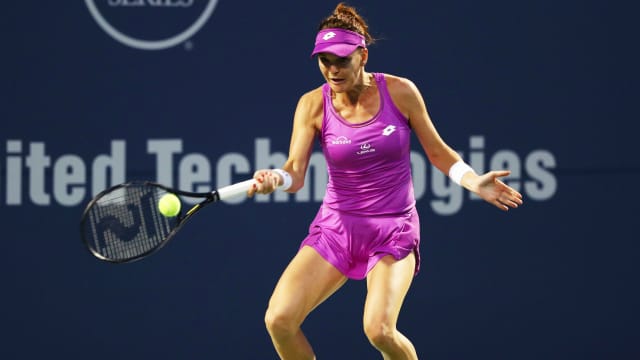 Seeking her first title of the year, Radwanska was made to work in the quarter-final battle lasting almost two hours at the WTA Premier event.

Next up for Radwanska is Australian Daria Gavrilova, who ousted qualifier Kirsten Flipkens 6-2 6-4.

Cibulkova progressed to the Connecticut Open semis for the first time in her career after prevailing against Anastasia Pavlyuchenkova.

In their third meeting of the year, Cibulkova emerged triumphant 7-5 6-4.

There was a 30-minute break in play as a fan received medical treatment with Cibulkova leading 6-5 after saving three break points.

Cibulkova returned to close out the set on Pavlyuchenkova's serve and the Slovak raced out to a 5-0 lead in the second.

.@Cibulkova is through to the @ConnecticutOpen Semifinals!

Fighting to stay in the match, Pavlyuchenkova reeled off four successive games and saved four match points but she was unable deny Cibulkova at the fifth opportunity.

Meanwhile, Elise Mertens advanced to the semis after Zhang Shuai withdrew due to injury.