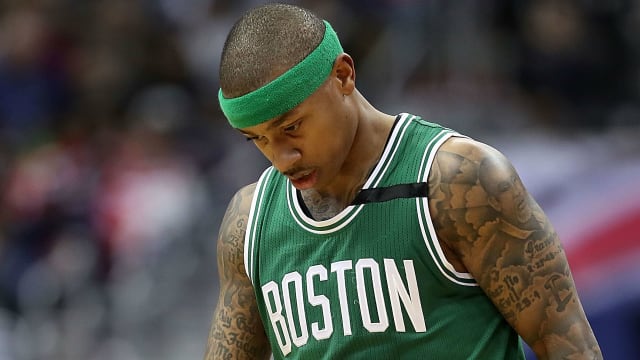 The Boston Celtics had their reasons for trading star Isaiah Thomas to the Cleveland Cavaliers.

Celtics general manager Danny Ainge told reporters on a conference call that the guard's hip injury played a role in Boston's decision to send him to the Cavaliers in a blockbuster trade for fellow NBA guard Kyrie Irving.

According to reports, the Celtics had "significant concern" about the state of Thomas' health and whether he would be rehabilitated by the beginning of the regular season.

"There's probably a little bit of delay for Isaiah to start this year," Ainge told reporters.

Thomas, who averaged 28.9 points and 5.9 assists last season, re-aggravated a right hip injury and was forced out of the Eastern Conference Finals in May, but claimed earlier this month he has gotten back in the gym and expects to be ready for the start of training camp.

The Cavs and Celtics finalised a trade on Tuesday that sent Irving from Cleveland to Boston in exchange for Thomas, Jae Crowder, Ante Zizic and the Brooklyn Nets' 2018 first-round pick.

Despite setting career highs last season with 25.2 points per game and a 47.3 field goal percentage, Irving requested a trade out of Cleveland, who reached the NBA Finals, reportedly to escape the shadow of superstar LeBron James.