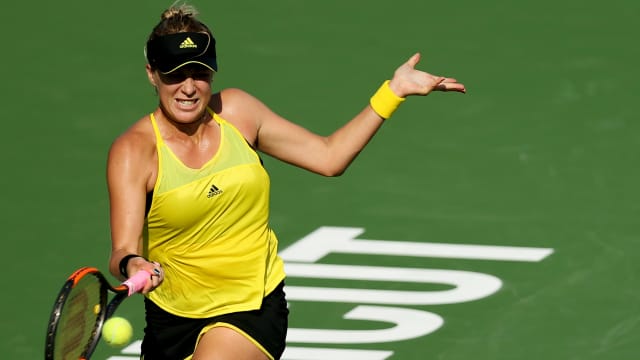 Anastasia Pavlyuchenkova edged Carla Suarez Navarro to advance to the quarter-finals of the Connecticut Open, where second seed Dominika Cibulkova battled through.

Russian sixth seed Pavlyuchenkova booked her seventh quarter-final berth of the year with a 7-6 (7-3) 6-0 victory in New Haven on Wednesday.

While Pavlyuchenkova cruised in the second set, she was forced to dig deep in the opener at the WTA Premier tournament.

Pavlyuchenkova gave up a 4-1 lead in the first set but rallied to see off the Spaniard in a tie-break as she went on to progress to the last eight.

"I fight for every point, I want to win every point and every match so it gets a bit emotional," Pavlyuchenkova said.

"I felt a little bit tired, so I didn't want to lose the first set for sure. Carla is a great player, a great fighter and was giving me a hard time in both sets - even the second set, where the score doesn't really show how tough it was."

Standing in the way of Pavlyuchenkova and a semi-final spot is 2014 Australian Open runner-up Cibulkova.

She twice found herself a break down in the final set before storming home to secure the remaining quarter-final place.