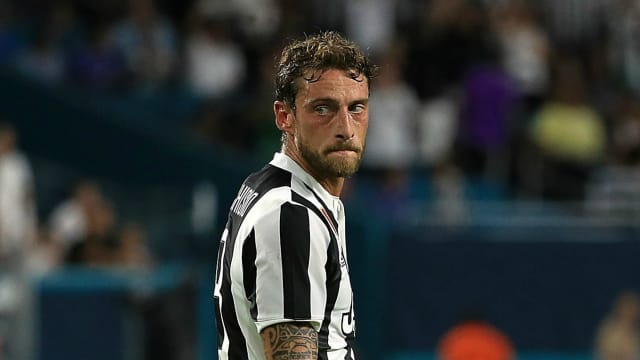 Claudio Marchisio has seemingly ended speculation he could leave Juventus before the closure of the transfer window.

Although injuries restricted the 31-year-old to only 18 appearances in Serie A last season, Marchisio appears determined to remain in Turin.

"Sometimes, no words needed #nodoubt #thankyou," Marchisio wrote on Twitter in response to speculation about his future, alongside a photograph of him with his hand on the Juve crest.

Juve's general manager Giuseppe Marotta has also rejected reports Marchisio is on his way out of the club after it was suggested his departure could be hastened by the EUR20million signing of Blaise Matuidi from Paris Saint-Germain.

"Symptoms of dissatisfaction absolutely do not exist at all within the club," Marotta said. "Marchisio is part of this squad which increases its level of quality year-on-year, and also in midfield we're different to a few years ago because there's more competition.

"After that it's up to the coach to decide who plays. However, it must be noted that we played 57 official matches last year, along with the international ones, so we really need a competitive squad.

"It is normal that Marchisio cannot always play and the same goes for [Sami] Khedira or Matuidi. It's very normal."

Marchisio - who has spent his whole professional career at Juve, barring a loan spell at Empoli in the 2007-08 campaign - had to pull out of international duty during the close season because of injury, but was in Massimiliano Allegri's team as Juve begun their title defence with a 3-0 home win over Cagliari on Saturday.