McGregor calls himself the 'new god of boxing'

Conor McGregor labelled himself the "new god of boxing" as his trash talking with Floyd Mayweather Jr. continued.

The two have been going back and forth over the last few months in the massive buildup to their highly anticipated bout at T-Mobile Arena on Saturday. 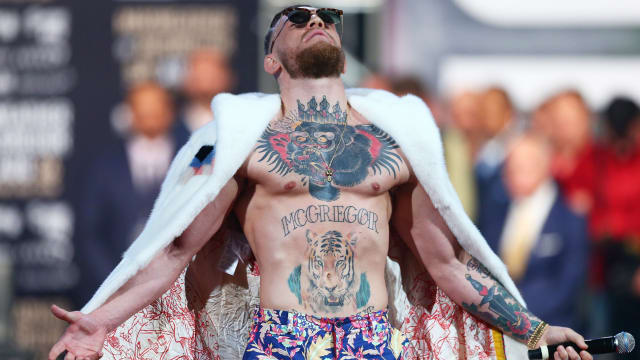 After Mayweather claimed the fight is "not going the distance", McGregor fired back.

"Floyd can talk about whatever he wants to talk about. He can talk any kind of trash he wants, because he's talking to the new god of boxing," McGregor told reporters at Toshiba Plaza for his grand arrival.

Inside ONE round now? #ConorMcGregor@TheNotoriousMMA#MayweatherMcGregorpic.twitter.com/BhuaoYnYom

Even before McGregor spoke with reporters and fans, there was a clash between his massive entourage and Mayweather's, which was first to arrive at Toshiba Plaza.

"The Irish are rolling in and whenever we roll in, we take over," McGregor said. "It was amazing to see all the Irish fans out today. It's going to be a great spectacle."

McGregor is 21-3 as an MMA fighter, but has never been knocked down or out. All three of his losses have been by submission. Mayweather acknowledged that, but questioned whether McGregor had the stamina for a 12-round fight.

"McGregor is a tough competitor. He's undefeated standing up. He's never lost when striking. I know that I'm in for a tough fight," said the 40-year-old Mayweather, who is trying to become the first boxer to go 50-0 as a professional. "But there is one thing I do know, this fight is not going the distance. No matter what anyone says, it's not going the distance."

FIGHT WEEK has officially begun with the Grand Arrivals today for #MayweatherMcGregor! pic.twitter.com/SWd483bqH8

McGregor, 29, said he was up for the challenge and that youth will triumph over age.

"I like the move from five- to three-minute rounds," McGregor said. "I feel like I've built a solid engine that is going to last me through the rest of my career and help me in the fight. We've put in the work. I've fought many 12-rounders.

"If people are overlooking my size, power and youth, they shouldn't be. I'm very confident in those attributes. I believe I'll knock him out early."

"If you look at the way I fight, I am a fast starter," the Irishman added. "I come out and bang people right away. With eight-ounce gloves, I don't see him lasting more than one or two rounds.

"I am my own man and I feel I am superior to Floyd. When it comes to Saturday night, he will not be prepared for me."