Mayweather v McGregor: Five things the UFC star has to do to shock the world 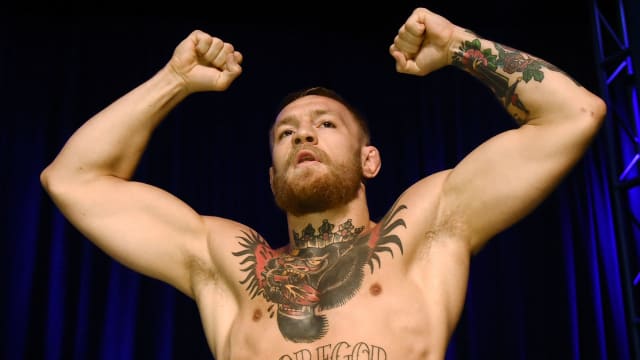 Conor McGregor will step into a professional boxing ring for the first time to fight one of the all-time greats in Floyd Mayweather Jr on Saturday and the general consensus on the outcome is pretty overwhelming.

You will be hard pushed to find an expert predicting anything other than a comfortable win for five-weight world champion Mayweather, who will take his record to 50-0 by silencing his rival in Las Vegas.

But there are few people in the fight game with the cocksureness that McGregor exudes and the feisty Irishman - the only man to have held titles in two weight divisions at the same time in UFC - will care little for the opinions of pundits.

That being said, McGregor is undoubtedly the underdog and we have examined five things the 29-year-old must do to shock the world.

BE FITTER THAN FLOYD

In Mayweather, McGregor is coming up against one of the best students of the game that boxing has ever produced. The American's ring craft and defensive skill have been unrivalled during his professional career.

That being said, at 29 McGregor is 11 years his opponent's junior and Mayweather has not fought for nearly two years.

When McGregor suffered a shock submission defeat to Nate Diaz in March 2016, he was heavily criticised for fatiguing after failing to produce the quick knockout he promised.

Against Mayweather, the likelihood is the fight goes to the later rounds and McGregor must give himself an edge in the fitness stakes.

Having fun and working hard. This is what life should always be. pic.twitter.com/jHlqZ4lESJ

McGregor will be in the unusual position of entering the fight arena being allowed to use only his hands.

That doesn't necessarily have to be a disadvantage, with McGregor's left hand among the most powerful in combat sports.

You only need to ask Jose Aldo, the fearsome Brazilian who was knocked out in just 13 seconds by McGregor, to know how true that is.

Few, if any, are better at avoiding the power punchers than Mayweather, but if McGregor can land with a flush left his jaw will be tested.

GET INSIDE MAYWEATHER'S HEAD

What McGregor lacks in boxing experience he certainly makes up for in confidence.

The Irishman is the king of mind games, but he has largely been able to back up his big-talking, wind-up merchant style jibes.

Against Aldo, many felt that the fight was won before he stepped into the ring with the Brazilian too keen to punish McGregor after months of verbal sparring.

There are signs already that McGregor's baiting is working on Mayweather, with the American yielding to his request to wear lighter gloves.

Nevada state regulations say fights over a weight limit of 147 pounds must see 10-ounce gloves used, but McGregor - used to 4oz gloves in UFC - goaded Mayweather by saying the heavier gloves are a tactic to dilute his power.

Mayweather also predicted a quick finish to the bout but, if the fight mirrors the majority of his career, that scenario is unlikely and may be a sign he is over keen to do damage to McGregor.

You can run. But you can't hide. pic.twitter.com/XXIrv21xG7

In UFC, McGregor likes to fight on the front foot and dictate the pace. His most recent bout was a prime example as he completely outclassed Eddie Alvarez to win the lightweight title.

Against Mayweather, the fight is unlikely to be fought on his terms. Mayweather's defensive skills and quick feet mean he won't land as readily as he would like to.

McGregor has to keep a cool head and take his chance when, or perhaps if, it arrives.

The luck of the Irish is a cliche, but it is one that McGregor will need to come to fruition to have his hand raised on Saturday.

Mayweather is the overwhelming favourite for a reason and anything other than a win for the 40-year-old would send seismic shockwaves through boxing.

But that is not to say that McGregor can't pull it off. If the stars align and luck is on his side then one of the greatest sporting upsets of all time can happen.

After all, it only takes one shot...