Mayweather-McGregor is a circus and I'd beat them both - Horn 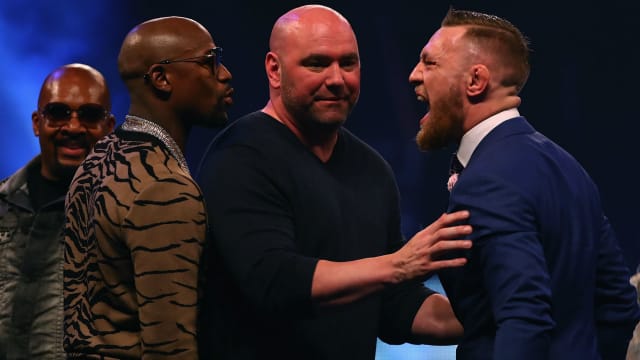 Floyd Mayweather Jr's meeting with Conor McGregor is "a circus" and WBO welterweight champion Jeff Horn is confident he would beat either man in the ring.

The pair meet in Las Vegas on Saturday for a blockbusting showdown that has dominated the headlines since it was officially confirmed in June.

Neither Mayweather or McGregor have been shy in throwing verbal barbs in the direction of his opponent in the build-up, but many experts have questioned the validity of the contest given McGregor is taking part in his first competitive boxing bout.

And Australian Horn, who stunned Manny Pacquiao in Brisbane in July, is among the fight's detractors.

"It's definitely a bit of a circus," he told Omnisport.

"Mayweather is a legend of the sport and he should take the fight down easily.

How do you look this good at 40? Only
Floyd knows! @FloydMayweatherpic.twitter.com/yD2FkUV0NB

"It's not a must-see fight, that's for sure. If you're interested in UFC or boxing you want to see your sport win. I know a lot of people don't want to see it and are not interested because it's such a circus but I'll definitely be tuning in and hopefully boxing will win.

"It's definitely not fight of the century, far from it, there are much bigger fights. The Golovkin-Canelo fight [in September] is an absolutely massive one that everyone should be watching.

"Some people I know don't want to see boxing and UFC mix because it's silly, boxing is going to win pretty much every time."

Wake up Floyd. It's all over. pic.twitter.com/XfssL4HrjV

Despite that opinion, Horn would be happy to take on McGregor, and laughed off the notion that Mayweather does not know who he is.

"I'd definitely consider fighting McGregor, I'd beat him and he wouldn't be able to bully me in there," Horn said. "I've got the boxing skills that would tear him apart.

"I've got the boxing ability to be able to beat Mayweather. They're calling me my wife's name, my wife's Jo Horn, she can beat me in a fight that's for sure!"