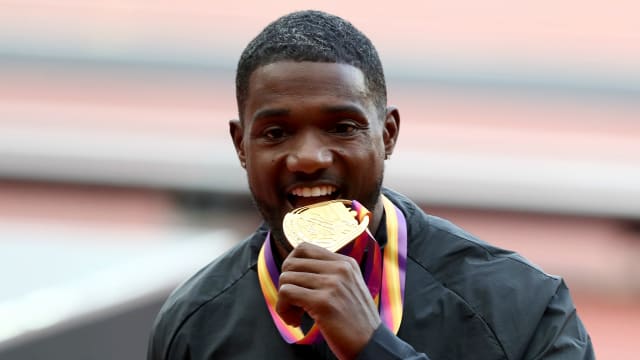 Justin Gatlin apologised to the world of athletics for his pair of drug bans after claiming gold in the 100 metres at the IAAF World Championships.

Gatlin shocked Usain Bolt in London to win his first World Championship gold medal for 12 years earlier this month but the American, who has twice been banned after testing positive for performance-enhancing drugs, was loudly booed as he topped the podium at the Olympic Stadium.

The 35-year-old has been accused of being unrepentant over his suspensions, the sprinter having insisted the first was as a result of medication he took for his attention deficit disorder and claimed the second was after he was sabotaged by a former employee.

However, more than five years after making his return to the sport, Gatlin finally offered a qualified apology to athletics supporters.

"If they want an official apology, I'm sorry. I'm sorry," Gatlin said to ITV. "I apologise for any wrongdoings I've brought on to the sport.

"I love the sport. That's why I've come back and run to the best of my abilities. I have worked hard to right my wrongs.

"I wrote a personal letter to the IAAF, before the trial, before I was sentenced, I wrote an apology. I started a programme where i went and talked to kids and told them about the pitfalls of falling behind the wrong people, staying on the path, doing the right things.

"These are things I thought of doing on my own. I was a role model to the future. The ones coming along. I still feel that way. The letter I wrote, which came out in 2015, it was suppressed for almost six years and I'm not sure who or why they suppressed it, but I did apologise."

Gatlin accepted it was difficult to have his big moment, beating all-time great Bolt at the World Championships, upstaged by the negative reaction he received from the London crowd.

"Especially at the starting line, I wasn't there for me. I was there for people back at home watching who weren't able to come. Maybe the boos were for me but me standing on the podium was for people that have loved me and my country that I love."