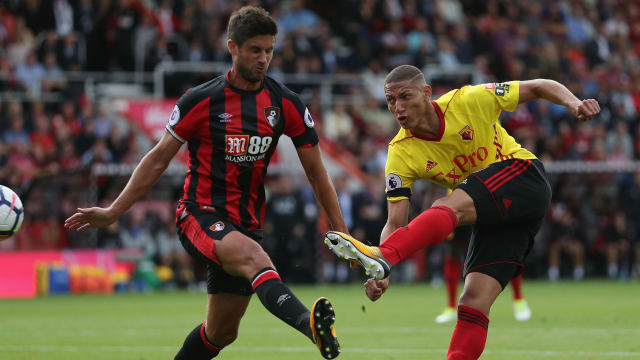 Andre Gray believes his fledgling attacking partnership with Richarlison can bring more success to Watford this season after the duo combined to fine effect in the 2-0 win over Bournemouth.

Gray became Watford's record signing by joined from Burnley for £18.5million and he lined up alongside Brazil Under-20 international Richarlison to make his full debut for Marco Silva's side at the Vitality Stadium.

Both men passed up chances to break the deadlock before Richarlison turned in Gray's 73rd-minute cross at the second attempt, while substitute Etienne Capoue crashed home from long range to make the points safe.

"Me and Richarlison seemed to be on same wavelength, he is an attack-minded player and hopefully we will keep playing well together and scoring goals," Gray told BBC Sport.

"He's quiet on the training ground - he's still working on his English - but he is a great player."

Watford are unbeaten across their opening two games in the Premier League after last weekend's thrilling 3-3 draw against Liverpool but Gray could not be completely satisfied, given he blazed over when teed up by Richarlison in first-half stoppage time on the south coast.

"As a team we need to be a bit more clinical, and I should have scored earlier," he added.

"But it is a great start. We were unlucky last week against a good side in Liverpool but importantly we learnt from it."

| "We're buzzing. We've put a lot of work into how the manager wants us to play & it paid off today. It's a great feeling."#watfordfcpic.twitter.com/wDUhjgaaV8

There were considerably fewer reasons to be cheerful for Bournemouth boss Eddie Howe, whose side are without a point or a goal to their name with games against Manchester City and Arsenal on the horizon.

"I thought we were very disappointing and I'm scratching my head as to why," Howe told BBC Sport.

"I was expecting a good performance, especially with the side I picked, but that didn't materialise.

"It was quite even at half-time, even though I didn't think we played very well, but in the second half we fell away, became bitty and got punished.

"If we had hung on longer it could have been different but I can't turn around and say Watford didn't deserve it.

"I'm concerned generally and especially because we have not looked like scoring. That's the biggest problem and there is a lot for us to work on."

"We now have Manchester City and Arsenal, so we need to react very quickly."