Durant: Irving situation not the end of the world for Cavs 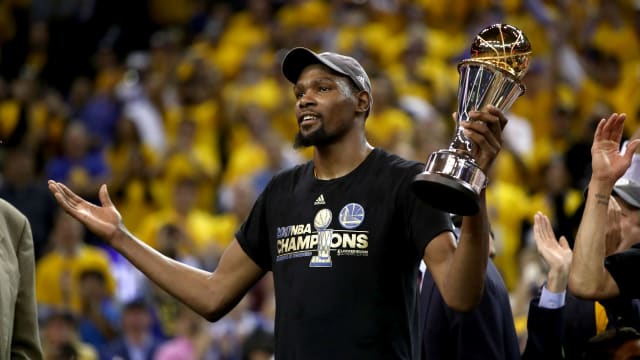 Golden State Warriors star Kevin Durant does not consider the Kyrie Irving situation with the Cleveland Cavaliers all that serious.

Irving is reportedly seeking a trade from the Cavaliers, who lost to the Warriors in last season's NBA Finals.

"It's just a regular NBA problem, right? A lot of teams have gone through this before," Durant said in an interview with ESPN.

Durant can speak about an NBA star wanting to leave another great player, just as he did in his very public departure from Oklahoma City following the 2016 season.

Now he is seeing it happen again with Irving and LeBron James.

The difference here though is that Durant's desire to leave did not get out before he left. Irving's desire did.

The fear is that Irving and James will not be able to coexist now that everyone knows the former wanted out. But Durant is not worried about that.

"It's not the end of the world," he said. "Both of those guys won a championship together. They love each other. If Kyrie wants to do something else, that's on him.

"I'm sure whatever happens, it'll work out for the best for both of them. But it's just a normal NBA problem. It's just two big stars that it's happening to."