McGregor aiming to 'put away' Mayweather in 10 seconds 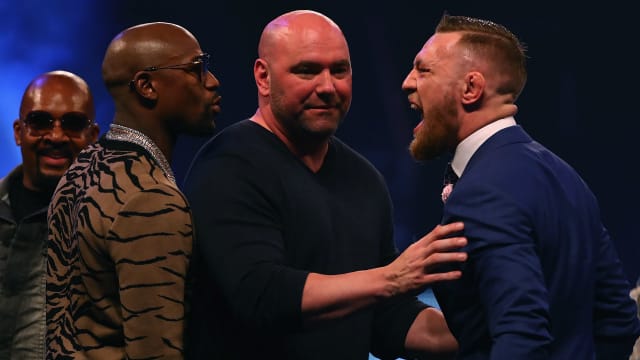 Conor McGregor does not need any help with his confidence, but the approval to use eight-ounce gloves in his matchup with Floyd Mayweather Jr. on August 26 just made him even more optimistic.

UFC champion McGregor will step away from the octagon and into the ring to face unbeaten boxer Mayweather in Las Vegas.

"I believe now that the gloves are eight ounces I don't believe he makes it out of the second round," McGregor said on a conference call on Wednesday.

The Nevada Athletic Commission ruled earlier in the day the fight would use eight-ounce gloves rather than the traditional 10-ouncers mandated for any match above 147 pounds.

McGregor and Mayweather agreed to a 154-pound bout.

"Part of me kind of wants to show some skill and dismantle him that way, but I do not see it," McGregor said. "I do not see him absorbing the blows in the first few rounds, but we are ready for absolutely every scenario.

Mayweather has used eight-ounce gloves in all but three of his 49 career fights, but McGregor does not care. The Irishman is still fully confident he will tally a knockout and hand Mayweather his first career loss.

McGregor addressed Paulie Malignaggi's comments again, simply saying that the former champion got his "a** whipped" and if he wants to fight he would be more than willing to take him on.

Secondly, McGregor considers himself still both the lightweight and featherweight champion of the UFC and intends to go back to MMA after this month's fight and take back his belt in the featherweight division.

Finally, McGregor feels boxing experts have been very dismissive of his chances in the ring and he fully intends to open their eyes.

"The disrespect and the disregard for my skill set, it's like, I look at people so many times and their mind is closed, they have a closed mind to how things can be going and it's a set way and there's no other way," he added. "Well if that's the case we never [would] have reached across the waters and sailed to other land and we'd never have went into space."