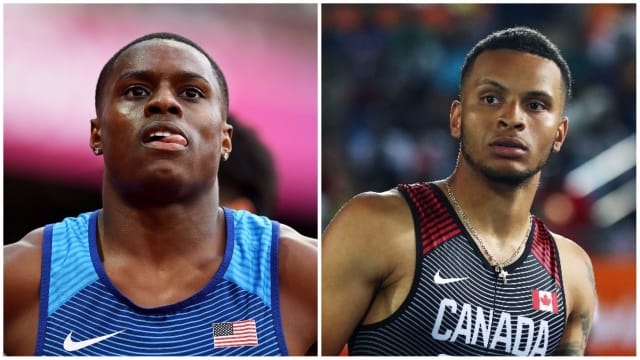 Christian Coleman hopes to form a sprinting rivalry with Andre De Grasse akin to that established between Usain Bolt and Justin Gatlin.

Bolt was the dominant sprinter for close to a decade, claiming eight Olympic golds and 14 IAAF World Championship medals before a hamstring injury saw his career end in distressing circumstances as he failed to finish Saturday's 4x100m relay final.

In his last individual event, the Jamaican had to settle for 100m bronze as Gatlin - cast as the villainous foil for Bolt due to his two doping bans - finally got the better of his sprinting adversary in a global final, with 21-year-old Coleman taking the silver in his first appearance on the stage.

De Grasse, 22, collected 100m bronze and 200m silver medals at Rio 2016 and was expected to add to his haul in London until a hamstring injury forced him to withdraw.

Bolt and Gatlin spoke at the Worlds about their amicable relationship despite years of facing each other on the track, and Coleman - who plans to add the 200m to his repertoire in Qatar in two years - hopes to have similar competition with De Grasse when they seek to stake their claim for dominance over the coming years.

Coleman told Omnisport: "[De Grasse] is a great competitor. He's a great guy as well. I would have liked to compete with him but, unfortunately, he had an injury. I'm sure he'll be in contention for years to come and I'm looking forward to it.

"Maybe [there will be a rivalry], just because we are two guys who people are saying will be in contention to win medals in the future and just like Gatlin and Bolt, they compete against each other year after year, they have a great rivalry and they're still friends.

"I think we can maybe develop something like that, but you've still got to take it one year at a time, one race at a time, and put the work in and don't take anything for granted.

"You've just got to continue to work and let the media worry about stuff like that."