Usain Bolt insists there will be no comeback 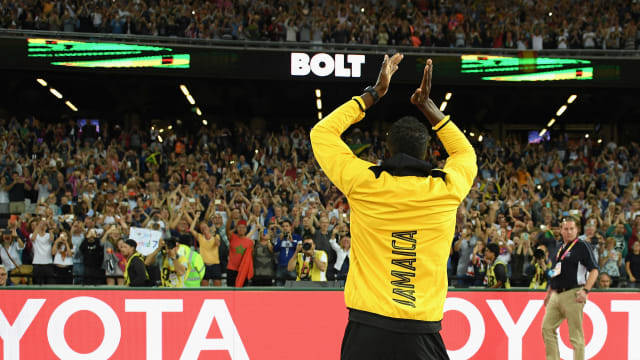 Usain Bolt insists he will not go back on his decision to retire after a painful end to his glittering athletics career, and says he has no regrets about racing for one more year following his success at Rio 2016.

Bolt made history at last year's Olympics by winning both the 100 metres and 200m for the third time in succession, but there was to be no fairytale send-off for the sprint icon at the IAAF World Championships in London.

Having finished third in his last individual race, the 100m final, Bolt sensationally pulled up lame with cramp in his left hamstring when running the anchor leg for Jamaica in Saturday's 4x100m relay.

Asked at a news conference on Sunday if he would consider a comeback, Bolt replied: "No. I've seen too many people come back and make things worse and shame themselves. I won't be one of those people who come back."

Explaining his decision to compete in 2017, he added: "My fans wanted to see me compete for one more year. Without them, I wouldn't have accomplished everything over the years. If I could come out here and give the fans a show, that's fine with me. That's all I wanted.

"One championship doesn't change what I've done. After losing the 100m someone said to me, 'Muhammad Ali lost his last fight so don't be too stressed'.

"I have shown my credentials throughout my career so losing my last race isn't going to change what I've done in my sport."

Bolt's injury was diagnosed as cramp by Jamaica's team doctor, but the 30-year-old added: "I will see what it is tomorrow [Monday] to see if it is worse than I think it is."

Commenting on his lap of honour in front of a packed London Stadium, Bolt said: "For me, it was brilliant. The support hasn't changed.

"It is sad that I have to walk away now. The energy of the crowd was great. I feel so at home and welcome here.