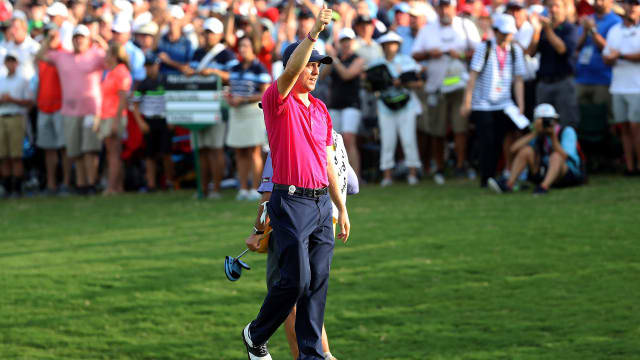 Justin Thomas sealed a US PGA Championship victory in front of friends on a day of drama, and trick shots, at Quail Hollow.

Thomas completed a two-shot win with a three-under 68 in the final round on Sunday.

Watching on as he claimed his first major title at the 18th were good friends Jordan Spieth and Rickie Fowler.

Thomas' victory was not yet complete when he made bogey at the 18th, as fellow Americans Spieth and Fowler watched on.

Spieth, who was bidding to become the youngest player to win a career Grand Slam, finished the tournament at two over, while Fowler shot a 67 in the final round to be tied for fifth.

But the duo, and Thomas' father, watched on in support as the world number 14 claimed what would prove to be a deserved win.

It was quite the way for Thomas to seal his win.

He birdied the 10th after waiting 12 seconds for his putt to drop and then chipped in at 13.

If the 'Green Mile' was there to make him nervous, it was no so, a par at 16 followed by a brilliant seven-iron that led to a birdie at 17.

He held a three-shot lead after his tee shot at the last, a bogey enough to seal his win.

Rahm and Lahiri were far from orthodox.

Unwilling to get wet on 18, Rahm played a ridiculous shot backwards as he made bogey.

Lahiri, meanwhile, played left-handed from a bunker on the 14th, also bogeying.