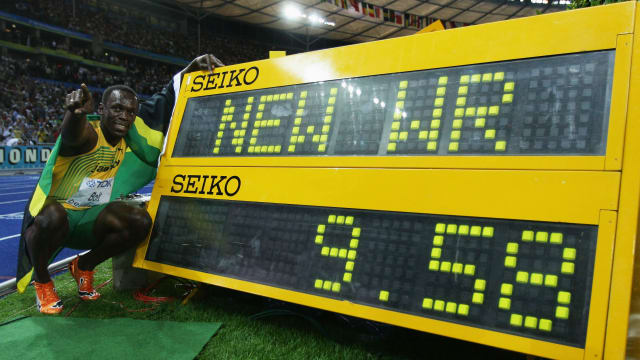 The illustrious career of Usain Bolt ended in dramatic fashion on Saturday as the sprint icon pulled up with an injury in his final race, the men's 4x100m final at the World Championships in London.

Bolt sensationally failed to finish the anchor leg for Jamaica, an apparent hamstring injury ending his hopes of bowing out with a 12th World Championships gold medal. Great Britain instead took gold ahead of the United States and Japan.

There had been disappointment for Bolt in London last weekend when he had to settle for a bronze medal behind Justin Gatlin and Christian Coleman in the 100m, his last individual race.

However, Bolt nevertheless ends his career as an undoubted great - having transcended his sport and made history on numerous occasions.

You can't write a script for sport.

Get well soon, @usainbolt. Thank you for being the .#IAAFworldspic.twitter.com/52c0g79v0w

Following his last outing, we take a look at the numbers that highlight his stunning success.

19 - Major gold medals Bolt has won in his career, having had his 4x100m relay title from the 2008 Olympics revoked due to Nesta Carter's doping violation.

7 - The number of times Bolt has set a world-record time across his specialist events.

34.2million - Bolt's estimated yearly earnings, in dollars, by Forbes, who calculate him to be the 88th best-paid celebrity in the world - in between Real Madrid footballer Gareth Bale and NBA star Derrick Rose.