Mayer on track for decathlon gold, Bolt feeling the love 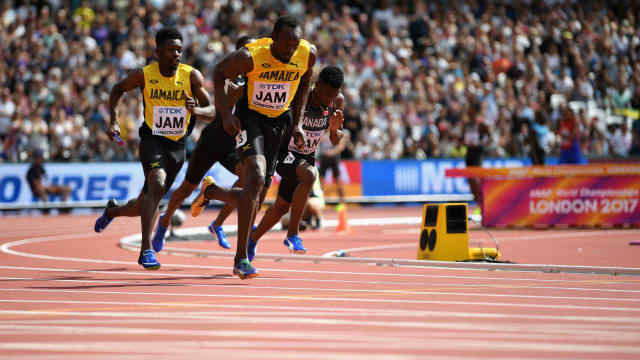 Kevin Mayer stayed on course to be crowned decathlon champion and Usain Bolt said there are "no words" to describe his feelings after Jamaica qualified for the 4x100 metres relay final at the IAAF World Championships.

Mayer holds a 116-point advantage over Rico Freimuth with only the javelin and the 1500m to come on Saturday evening at London Stadium.

The Frenchman maintained his march towards a first world title with strong showings in the 110m hurdles, discus and pole vault.

Bolt will have the chance to end his career with another gold medal after he led Jamaica home to reach a relay showdown a week after he could only take bronze in the a 100m final won by the controversial Justin Gatlin.

Following legs by Tyquendo Tracey, Julian Forte and Michael Campbell, Bolt finished off the job as Jamaica won their heat in a season's best 37.95 seconds.

Bolt will later bring down the curtain on a sensational career, going for a record 15th medal at the Championships and what he hopes will be a 12th gold.

fans will come out one last time for @usainbolt. All eyes are on him ? #BeTheNextpic.twitter.com/R7R9xzoBzl

MAYER ON THE MARCH TO GOLD

Mayer led the way after day one of the multi-discipline event and continued his march to a first major global title by taking his points tally to 7237.

German Freimuth reduced the deficit by winning the discus with a throw of 51.17m to Mayer's 47.14m, but Mayer cleared 5.10m in the pole vault at the third attempt to ensure he still leads the way.

Freimuth cleared 4.80m, but failed at 4.90m and remains second ahead of compatriot Kai Kazmirek.

Bolt had to listen to boos when Gatlin failed to read the script in the 100m final last weekend, but the noise generated by the crowd in the relay heats was music to his ears.

He said: "There are no words to describe how I am feeling. I get so much support from the crowd. I appreciate that a lot. The young runners in our team - it is just about executing and coming through the race for them.

"All the energy I am getting from the crowd. It is brilliant. We have been training that relay, there were some camps. Still there were some mistakes. Yohan Blake coming in for the final is definitely good."

Gatlin and the United States will be aiming to deny Bolt again on the penultimate night after they won the first heat in a world-leading 37.70secs.

The United States have already amassed a mammoth 23 medals - 15 more than second-placed Kenya - and they should be able to count on another two in the 4x400m relay finals on Sunday.

Both the women and the men were quickest in their heats, with world-leading times of 3:21.66 and 2:59.23 respectively.

Isaac Makwala's hopes of claiming a medal for an emotional World Championships ended when Botswana failed to make the final in his absence.