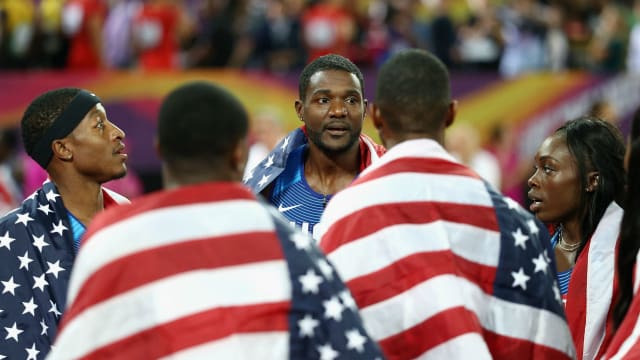 Justin Gatlin felt his age after the United States were pipped to gold in the IAAF World Championships 4x100 metres relay final by Great Britain.

Nethaneel Mitchell-Blake managed to beat Christian Coleman to the line in a dramatic finish that saw Usain Bolt fail to finish after sustaining cramp in his hamstring.

Despite the distraction of Bolt's final race ending in distressing and unfitting circumstances, Great Britain was able to celebrate their first global gold in the men's event since the Olympic Games in Athens 2004.

For Gatlin, who became the oldest 100m world champion in history last weekend and was part of the US team that were beaten by Great Britain in Greece 13 years ago, it rekindled old memories.

"I was on the 2004 Olympic team when we lost to Great Britain then pretty much in the same fashion, with Maurice Greene," said Gatlin at a news conference, before turning to the gold medallists and asking: "What were you doing in 2004? Were you in grade school?"

Chijindu Ujah, aged 23 and the second-youngest in the GB line-up, responded: "I was in primary school."

Gatlin smiled as he replied with the quip: "Yeah, I've been around a long time."

Daniel Talbot, the oldest member of the gold-medal winning relay team at 26, believes the victory could provide a foundation for Great Britain to continue challenging the US and Jamaica for the top honours.

"Hopefully we're still developing. We've just got to keep pushing each other. As a nation we are getting stronger," said Talbot.

"We can try and be the best in our country and we will still come together as a team and hopefully we won't have to wait another 13 years for a global title.

"We've got to contend with the best athletes in the world. Hopefully we can compete for more global titles but we appreciate it is really difficult to do that."