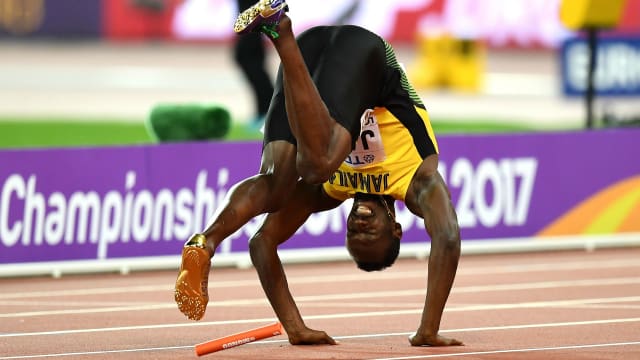 Usain Bolt's illustrious athletics career finished on a painful and shocking note at the IAAF World Championships, the iconic sprinter pulling up with an injury as Great Britain claimed a shock gold in the men's 4x100m relay.

Bolt set off on the final leg behind the United States' Christian Coleman and Nethaneel Mitchell-Blake of Great Britain and pushed too hard to reach the front, appearing to pull a hamstring and falling to the ground as he failed to finish.

While the Jamaican lay prone, it was Britain who crossed the line first in a world-leading time of 37.47 seconds, the US - booed upon entry with 100m champion Justin Gatlin on the second leg - second and Japan taking the bronze.

The crocked Bolt was soon joined by his team-mates Omar McLeod, Julian Forte and Yohan Blake, who helped him to his feet and across the line before departing down the tunnel.

Rather than bemoaning a far from fitting end to the 30-year-old's distinguished career, the crowd inside London Stadium were lost in celebration for the victorious home nation.