I gave it all - Farah reflects on silver swansong 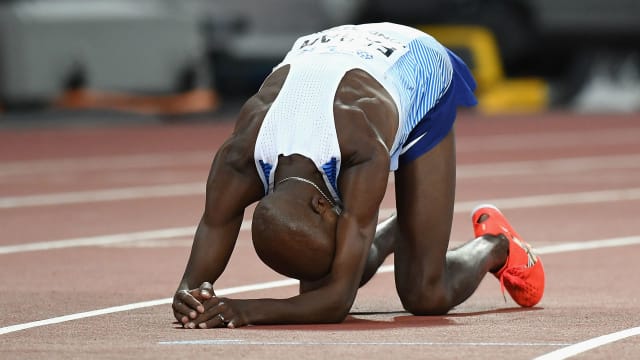 Mo Farah reflected on an "incredible" journey and said he had left everything on the track after his final race at a major global event ended in disappointment with a second-placed finish in the IAAF World Championships 5000 metres.

Farah was looking to add the 5000m title to the 10,000m crown he claimed in London last weekend and complete a distance double for the fifth successive major championship.

However, the Briton - who is set to shift his focus to road running - had to settle for a silver medal on Saturday as Ethiopia's Muktar Edris proved strongest on the final lap.

"It's very special ... it's been a long journey, but it's been incredible," Farah told BBC Sport.

Asked whether the 10,000m had impacted on his hopes of winning the 5000m, the 34-year-old said: "To be honest with you, it takes so much out of me. It's not an excuse, but it took a lot more out of me than I realised.

"Tactically, I was trying to cover every move and they [Edris and Ethiopian team-mate Yomif Kejelcha] had a gameplan. One of them was going to sacrifice himself, and that's what they did.

"The better man won on the day, but I gave it all. I didn't have a single bit left at the end.

"I've got a few more races planned - after that I want to take a break and see what I could do on the road. But this chapter is closed."

Muktar Edris prevails in an incredible men's 5000m at #IAAFworlds

He wins Ethiopia's second gold at these world champs pic.twitter.com/Vm1l8twpOc

A delighted Edris performed Farah's trademark 'Mo-bot' celebration after claiming victory, but insisted his actions were borne out of respect for the defending champion.

"I was highly prepared for this race and I knew I was going to beat Mo Farah," said Edris. "After the 10km he was maybe tired so he did not have enough for the last kick. I was stronger.

"Mo has many victories but now I have one. I am the new champion for Ethiopia. That's why I did the Mo-bot. I am the next champion.

"I have won the gold in front of his home crowd. I didn't have much support but we did it. I did the Mo-bot out of respect as well for him."