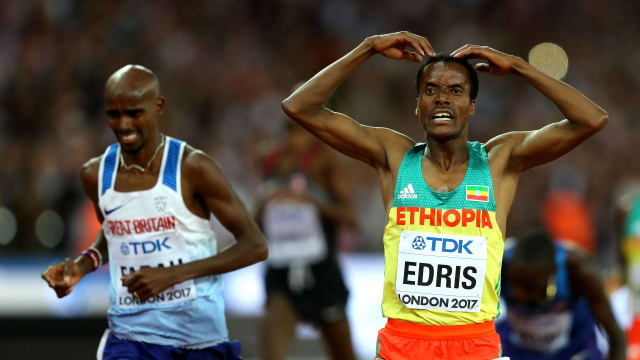 A fifth successive distance double proved just beyond Mo Farah as he was beaten to 5000 metres gold by Muktar Edris in his final major championship race at London Stadium on Saturday.

The Briton had won over 5000m and 10,000m at the past two IAAF World Championships and Olympic Games, but Ethiopia's Edris denied him gold with a time of 13 minutes and 32.79 seconds.

Farah, who won the 10,000m once again last weekend, dug in to finish 0.43secs behind new world champion Edris, while Paul Chelimo of the United States claimed bronze.

Edris celebrated his victory with Farah's iconic 'Mo-bot' celebration, while the silver medallist's astonishing career accomplishments were recognised by a rapturous ovation from the adoring crowd.

Muktar Edris dethrones the king! The youngster triumphs in a tense sprint finish and beats Mo Farah in to silver ?#BeTheNext champion pic.twitter.com/mlwtrhsE63

Farah set off on a lap of honour following the result, his attempts to secure further glory destined to continue over longer distances on the road.

Chelimo settled into an early lead but Andrew Butchart and Farah moved to the front after the first kilometre.

Selemon Barega tested the field with a short dart clear after 2000m, failing to make it stick with Farah battling Cyrus Rutto and Edris for position at the front.

Patrick Tiernan was the next to break clear but he was reeled in with 600m remaining and it was Yomif Kejelcha who led into the final lap.

Kejelcha and Edris then kicked on to leave the fast-finishing Farah with too much work to do, the home favourite's battling efforts in the home straight only enough for silver.

Despite missing out on yet another gold, an eighth World Championships medal cements Farah's legacy as one of the greatest endurance runners to have ever graced the track.