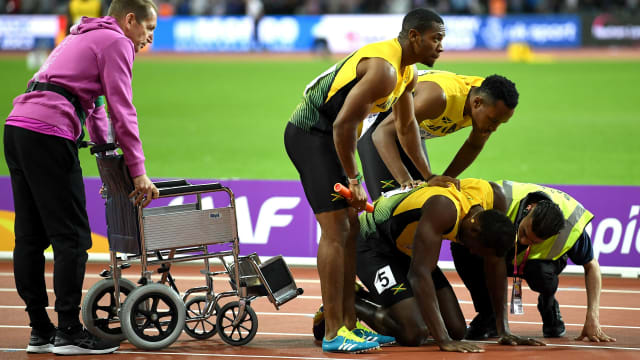 It was far from the most fitting of farewells to the iconic Usain Bolt as he sustained cramp in his hamstring and failed to finish the IAAF World Championships 4x100 metres relay final.

Bolt, whose final individual event was the 100m decider last weekend and in which he could only take bronze, bowed out in distressing fashion, laying in pain on the ground and failing to finish as Great Britain took gold from the United States.

The Jamaican - an eight-time Olympic champion and 14-time World Championships medallist - was helped up by his team-mates and hobbled off the track as the crowd inside London Stadium celebrated a first GB gold in the event since Athens 2004.

There was a slice of history for Allyson Felix as she picked up a 15th medal on this stage with the US taking gold in the women's 4x100m, while Mo Farah's final track race at this level failed to bring a fifth-straight distance double and Sally Pearson returned to her throne as the 100m hurdles champion.

Jamaica were third when Bolt took the baton from Yohan Blake, an injury doubt before the race, and his eagerness to catch Christian Coleman and Nethaneel Mitchell-Blake proved his undoing.

The 30-year-old cramped up and failed to finish, with Britain ending up the unlikely winners ahead of a US team that included 100m champion Justin Gatlin and Japan.

It provided a disappointing end to the iconic sprinter's career, but 110m hurdles champion Omar McLeod, who ran the first leg for Jamaica, assured Bolt will always be remembered as one of the all-time greats.

"Everybody was jelly, everybody was pumped. Usain Bolt's name will always live on," he told reporters.

It's been an amazing 15 years.#IAAFworldspic.twitter.com/hdbLU4AQfl

An injury sustained while diving across the line to take gold in the 100m final last weekend forced Tori Bowie to withdraw from the 200m.

After skipping the 4x100m heat, Bowie showed the electric pace that secured her individual medal by holding off Great Britain's Daryll Neita on the final leg, with Jamaica - who did not have Elaine Thompson in their line-up - coming third.

Their time of 41.82s was the fastest of the year and the gold provided Felix with a record-breaking 15th medal at the World Championships, taking her past the hauls of Merlene Ottey and Bolt.

She has a chance of adding to her unprecedented tally in the 4x400m relay on Sunday.

Allyson Felix has now a record 15 medals at the #IAAFworlds

She could add to her tally tomorrow... pic.twitter.com/1TmBhcfQYN

Farah has dominated distance racing on the track since his first of four straight 5000m and 10,000m doubles at the 2012 Olympics, but he could not make it five on the trot back at the site of his first.

The 34-year-old led the pack for the majority of the race and reeled in the final breakaway from Patrick Tiernan with 600m remaining. However, Muktar Edris had more left in his legs down the home straight and the 23-year-old forced the 10,000m champion to settle for silver as he celebrated with his rival's trademark 'Mobot' celebration.

Farah set off on a lap of honour to wave goodbye to the home crowd who have supported him so brilliantly throughout the Championships, with his future laying on the tarmac after the Diamond League final in Zurich later this month.

"It's been amazing. It's been a long journey but it's been incredible. It doesn't quite sink in until you compete here and cross the line - I had a couple of minutes to myself - that this is it," he said.

PEARSON PULLS IT OFF, HARRISON HAS A HOWLER

After missing the 2015 World Championships due to a horror wrist injury and Rio 2016 with a hamstring tear, Pearson reclaimed her throne at the site of her greatest triumph with a time of 12.59s.

"It's been a long journey back from injury, but to get this moment and go and celebrate in front of my family is unreal," said Pearson. "My husband is in the crowd there somewhere, I'll try and find him and give him a hug soon. This is just so incredible to be a world champion again."

Massive congrats to @sallypearson on an amazing comeback from injury. We're all better when Sally is in the blocks next to us. #IAAFWorlds

After a strong start Harrison clipped the second and third hurdles, providing more disappointment after she missed out on a spot at last year's Olympics.