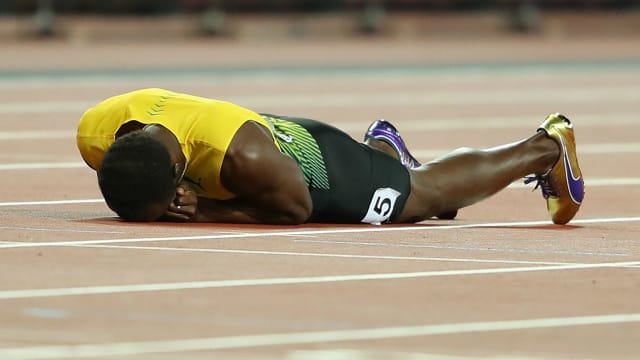 An angry Yohan Blake suggested a lengthy wait in cold conditions contributed to Usain Bolt's career ending in painful fashion, after the iconic sprinter sensationally pulled up injured in the men's 4x100m relay at the IAAF World Championships.

Having been forced to settle for a bronze medal in his last individual race, last weekend's 100m final, Bolt had hoped to bow out with a 12th World Championships gold.

However, after taking the baton in the anchor role for Jamaica, Bolt dramatically failed to finish, instead falling to the ground with an injury later diagnosed as cramp in his left hamstring.

"That long wait contributed. Inside it was cold. We kept on warming up.

"You have to think about the athletes ... because we were in the mixed zone too long, over 40 minutes.

"He was saying he was sorry, but there was nothing to be sorry for, he's done it for us [over his career]."

It's been an amazing 15 years.#IAAFworldspic.twitter.com/hdbLU4AQfl

Dr Kevin Jones, the Jamaica team doctor, said of Bolt's injury: "It's cramp in his left hamstring but a lot of pain is from the disappointment from losing the race.

"The last three weeks have been hard for him. We hope for the best for him."