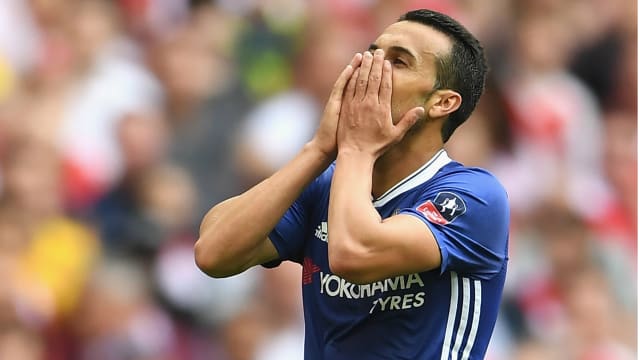 Chelsea forward Pedro has been ruled out of the Premier League champions' opener against Burnley on Saturday due to an ankle injury, while new signing Antonio Rudiger could start.

Head coach Antonio Conte provided a fitness update ahead of the game at Stamford Bridge, revealing Pedro has not recovered from a problem he sustained before being sent off in the Community Shield against Arsenal last week.

Former Roma defender Rudiger, meanwhile, could be in line to make his first start for Chelsea due to Victor Moses' suspension.

"Pedro is not available because he is suffering from an injury he got during the Arsenal game," Conte said at his pre-match media conference.

"He wasn't able to recover from this injury. It is a knock in his ankle."

Conte added: "There could be an opportunity to start the game for Rudiger because Moses will miss out for one game.

"I have been impressed because he is a good player. He is strong physically, has a good personality and technique."

Conte has been impressed by the commitment of his players ahead of the defence of their title, claiming it is better than it was ahead of the 2016-17 season.

"Honestly, I am pleased with the squad because we are working very well with the players, the commitment is incredible, better than last season," he said.

"[They have improved from last year] in the way they work in the training session. I am very happy because these players are working very well, so hard. We are trying to improve.