Going the distance would be a 'victory' for McGregor, says Mayweather 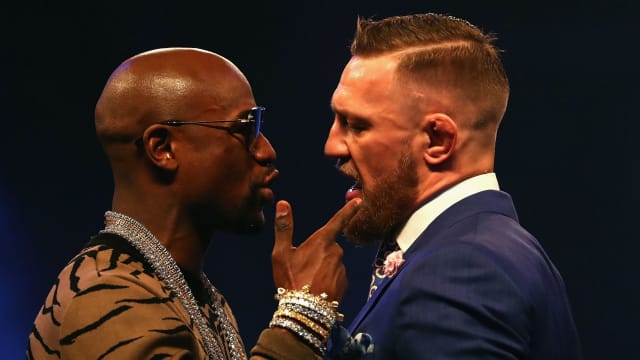 Floyd Mayweather says it will be a "victory" for Conor McGregor if their lucrative grudge match goes the distance in Las Vegas.

Most boxing experts are predicting five-weight world champion Mayweather will coast to victory against UFC star McGregor, who is making his professional debut in the squared circle.

Indeed, it would be viewed by many as a moral victory for the big-talking Irishman, the first man to hold belts in two weight divisions at the same time in UFC, if he can see the fight through to the end.

And that is a view shared by Mayweather, who will take his career record to 50-0 with victory at the T-Mobile Arena on August 26.

"He believes it's not going past four [rounds] and I believe that it's not going to go the distance at all," Mayweather told reports at his media workout.

"He feels one way, I feel another way, we are both confident in our skills and we'll just have to see.

Earlier this week, Mayweather stated in an interview with ESPN that McGregor, 11 years his junior at 29, has the edge "on paper".

But Mayweather was keen to clarify his thoughts.

"Of course, the so-called boxing experts, they say things like, 'oh when a guy is bigger and stronger, that means he's better'," Mayweather added.

"So, I never said that I feel that I'm gonna lose. I never get involved in anything if I think I'm gonna take a loss.