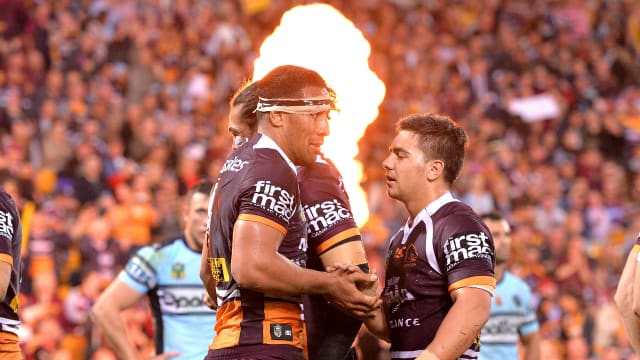 Brisbane Broncos marked Wayne Bennett's 600th game in charge of the club with an emphatic 32-10 win over Cronulla Sharks after Newcastle Knights dealt a blow to Parramatta Eels' hopes of securing a top-four NRL finish.

Cronulla captain Paul Gallen made his 300th appearance for the Sharks on Friday, but it was Bennett who was able to celebrate a victory in his landmark match against the defending premiers.

The Broncos took another big stride towards sealing a spot in the top four with three rounds remaining, outscoring Cronulla by five tries to two to go second in the ladder.

Matt Gillett set them on their way by bursting through for the opener and Darius Boyd added another before Luke Lewis' converted try just before the break reduced the deficit to 14-6, Anthony Milford having converted twice and slotted over a penalty.

Tautau Moga showed devastating power and pace to go over twice and Corey Oates was left with a simple finish as the Broncos made a big statement, with Milford taking his tally for the night to 12 points from the tee after Gerard Beale's late try.

Parramatta missed the chance to move into the top four when their six-game winning streak was ended by a 29-10 loss against the Knights.

The Knights extended their run of successive victories to three to move off the foot of the ladder, former Eels winger Ken Sio scoring two of their five tries and Brock Lamb playing a key role as the Eels were stunned at ANZ Stadium.

That's a double for Sio!#NRLEelsKnights 10-28 with 12 minutes to go. #NRLpic.twitter.com/wpuuq2eGQi