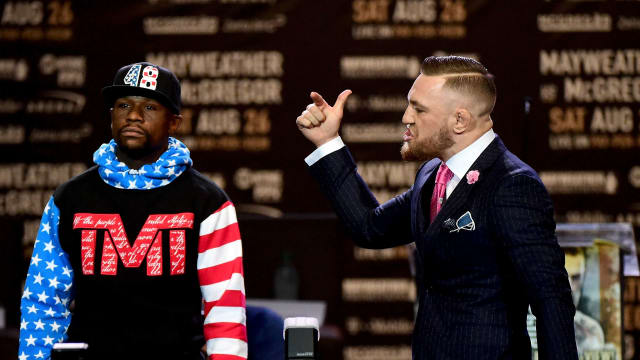 Conor Mcgregor and Floyd Mayweather Jr have each requested to wear 8oz gloves in their Las Vegas bout.

McGregor has regularly goaded Mayweather over seeking an advantage by only fighting in a boxing environment - MMA fighters generally wear 4oz mitts in their contests - but the 40-year-old has seemingly yielded, having vowed to fight in lighter gloves on Instagram earlier this month.

"Both camps have submitted a waiver by the date we requested," Bennett told ESPN.

"The commission will hear both camps' reasoning as to why it should deviate from its regulations during a scheduled meeting on August 16.

"Our chairman Anthony Marnell will then lead a conversation with the other commission members and they will vote on it that day."

Don't believe what you hear in the media. Don't believe what you hear on blog sites. If it's not coming directly from me, then it's not true. I'm telling McGregor, "Let's fight in 8 oz gloves". McGregor can fight in any brand he prefers or chooses. I'll be wearing 8 oz Grant gloves. Whatever advantage McGregor needs to feel more comfortable in the ring, I'm willing to accommodate. Let's give the boxing and MMA fans what they want to see. @grantworldwide @mayweatherpromotions