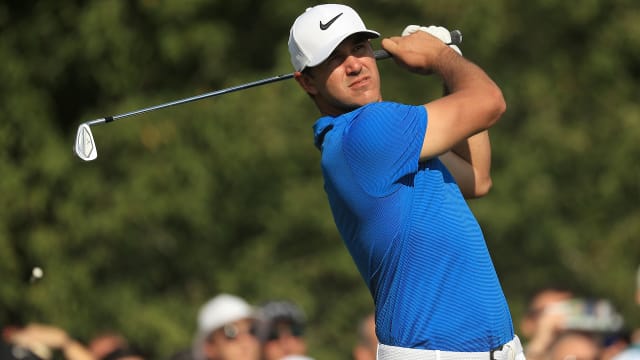 Brooks Koepka struck a marshal with a drive at the US PGA Championship on Thursday as the 'Green Mile' showed its toughness despite still conditions.

Koepka, the U.S. Open champion, hit a marshal with his tee shot at the 16th hole at Quail Hollow - his ball fortuitously ending up on the fairway.

The American signed a glove for the man, but still went on to make bogey at the par-four hole, the beginning of the Charlotte course's famed 'Green Mile' stretch.

Koepka was at even par through nine while Jordan Spieth - looking to become the youngest man to win a career Grand Slam - was alongside him, while the other member of their group, Sergio Garcia, was four over after struggling at 16 and 18.

.@BKoepka signs a glove for marshal hit by his drive on 16 pic.twitter.com/hu6Zn1G9Tc

Americans Gary Woodland and Jim Herman were leading at three under, while Hideki Matsuyama carried some momentum from his WGC-Bridgestone Invitational win by birdieing his first two holes, but he was even through 12.

Winds are set to pick up slightly later in the day, when Rory McIlroy is among those teeing off, but there was no sign of the forecast scattered thunderstorms, which are now expected Friday through Sunday.