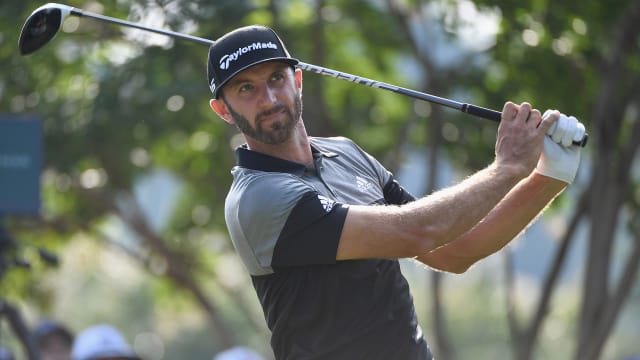 Dustin Johnson was just happy to be under par at the end of his opening round at the US PGA Championship after conceding that the speed of the greens has turned Quail Hollow into a particularly imposing course.

The world number one mixed three birdies with two bogeys on Thursday to card a one-under 70 at the year's final major.

That left Johnson three shots behind clubhouse leader Thorbjorn Olesen, the Dane having posted a fine 67.

But the American was satisfied with his start, saying he had regained confidence with his driver.

"I hadn't been swinging that good. I definitely hadn't had a lot of confidence in the driver," Johnson said.

"This week, I worked hard on it and I got a lot of confidence in the driver. I feel like I'm swinging it really well. Got control over it finally.

"The ball is kind of starting where I want it to. It's got the right shape. Out here, it's a big key. You have got to hit the fairways. That's what I did well. I hit a lot of fairways.

"Definitely could have shot a little bit better but it's one under. I think anything under par on this golf course is a pretty good score."

After a close approach at No. 5, @DJohnsonPGA is back to -1.pic.twitter.com/0J8CTbOSUw

Players struggled early on at Quail Hollow despite calm and warm conditions.

Johnson said the speed of the greens was undoubtedly the biggest test at the Charlotte course.

"The greens, they are really fast. I thought they had a lot of difficult pins out there [too]," he said. "That's what is very tough about this golf course."