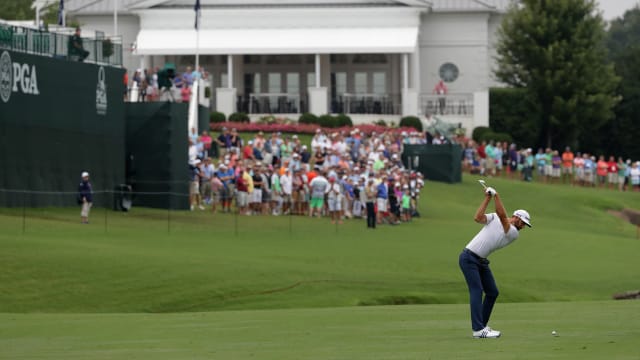 Practicing with the world number one at a major? Just like playing with one of your best mates.

That was the verdict from Stuart Deane at the US PGA Championship, after superstar Dustin Johnson joined him on the back nine at Quail Hollow on Wednesday.

Deane, the head golf coach at the University of Texas at Arlington, was going through a routine practice round in fine conditions in Charlotte, North Carolina.

With student Zach Cole as his caddie this week, Deane teed off at the 13th with few watching. When he reached the green with his second shot at the 208-yard par-three hole, fewer remained.

After hitting a couple of tee shots at 14, Deane - who qualified through the PGA Professional Championship - paused. He waited. Deane had practiced with American duo Brian Harman and Daniel Berger on Tuesday, but what followed would surpass that.

"I said, 'We'll just stand here and wait for him to come up on the tee and he [Zach] was like, 'okay.' Comes up [and], 'come on, play,'" Deane told Omnisport at Quail Hollow.

"It was awesome. DJ, it was awesome, super nice, his brother AJ [Austin] is just phenomenal. They kind of talked us through what they do, how they do it, why they do it and for Zach it's just an amazing learning experience.

"It was fun to go from no-one follow us to the world. It was a lot of fun, we had a great time and he's a great guy, it was like playing with one of your best mates."

The crowd that followed Johnson to the 14th was enough of an indication one of the biggest names in the game was nearby.

But the number multiplied as the 2016 U.S. Open champion and Deane completed the final holes in ideal conditions.

Johnson and Deane were in constant conversation on the fairways, the former - who was unsurprisingly just a few yards short of reaching the green in two at the 557-yard 15th - seemingly more than happy to help.

"We chatted every hole. In the middle of 15 when we got to my third shot there we were talking about wedge play and he flat stopped for just three or four minutes telling us exactly what he does and how he does it and how he practices," Deane said. "He's got his three wedges and how he sets it up. It was very cool.

"Very cool from the standpoint that you've got the number one in the world and it's not like he's got a secret. He's totally happy to share what he does and how he does it, especially with Zach being 19.

"I posed a question to DJ. I said, 'Well, look, you were where Zach is, so how did you get from there to where you are?' And that's when he kind of went on and went this is how I've done what I do. It was awesome. Just to have that experience is very cool."

Picturesque Quail Hollow, where world number one Dustin Johnson has been out early. #PGAChamppic.twitter.com/GVqiYdv30H

By the time Johnson, who appeared to find water at 16 and the creek at the last as 'The Green Mile' posed a test, and Deane were making their way up the final fairway, the gallery had only grown.

"With the gallery, whether I'm playing by myself or I'm playing with them, they don't watch what I do, they're all watching him so really it's insignificant. It's not like it's a daunting deal to be walking with him. The eyes are all focused on him, and hopefully they look at the bag and they see the UT Arlington there and we get some recognition that way."