With good VAR, it would be extra time - Mourinho unhappy with Casemiro Super Cup goal 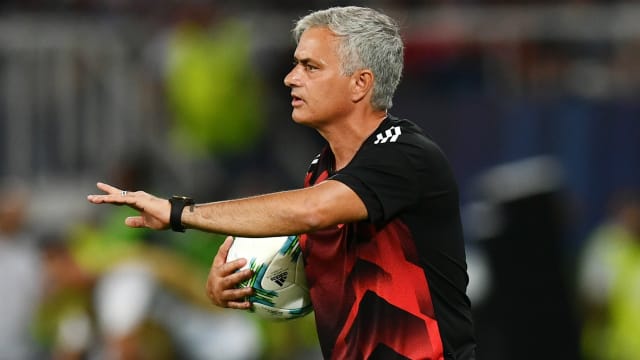 Jose Mourinho was frustrated that no VAR system was used to rule out Casemiro's opening goal in Manchester United's 2-1 UEFA Super Cup loss to Real Madrid.

The Brazilian broke the deadlock in the 24th minute in Skopje, steering Dani Carvajal's long pass into the bottom corner of David de Gea's net, despite replays showing he had strayed fractionally offside.

The officials allowed the goal to stand and Isco secured the victory early in the second half, although Romelu Lukaku's strike on his competitive debut ensured something of a nervy finish.

Mourinho believes the match was largely a balanced affair and that United would have forced extra time had a video referral system been in use to check the Casemiro offside decision.

"I think we did well, I think we lost to one goal which shows the result was really short and one of their goals was an offside. With a good VAR system it would be 1-1 and extra time," he told BT Sport.

Casemiro was delighted with the goal and refused to speculate on whether it should have been disallowed.

"The referee is the one who has to look," he told beIN SPORTS. "It was a great goal.

"They caused us some problems. They have a great coach and great players, so we have to congratulate the team for the work they've done and the history we're making."

Mourinho has now failed to beat Madrid in five attempts in competitive matches and has yet to get his hands on the Super Cup trophy.

However, the former Chelsea boss says he has never enjoyed working with a team as much as he has at United and is determined to enjoy success in 2017-18.

"We were playing a team full of fantastic players," he said. "We gave them a fight but have reasons to leave optimistic and proud.

"We deserve rest on Wednesday and Thursday we start. I am so happy to be manager of these guys and told them I have never had a group I like as much as I like them. I am going to fight with them all the way."