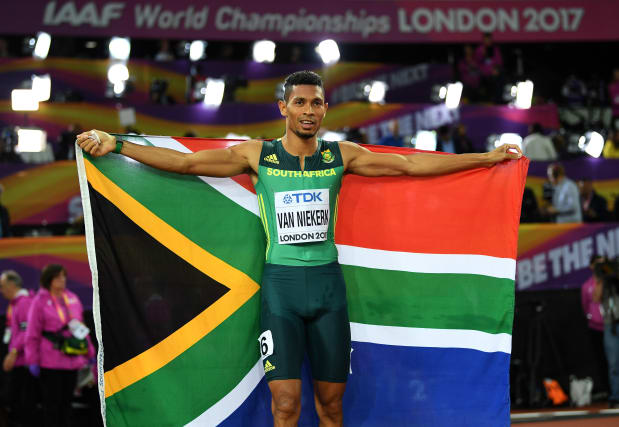 Wayde van Niekerk has his sights firmly set on a first global title in the 200 metres after storming to 400m glory at the IAAF World Championships on Tuesday.

Van Niekerk is aiming to follow in Michael Johnson's footsteps and become just the second athlete to take gold over the two distances at the same championships, and he completed the first leg in commanding fashion.

However, Isaac Makwala, the man expected to be his main challenger, was kept out of the race with the IAAF citing a desire to stop the 30-year-old from infecting other athletes having been pulled from the 200m heats on Monday with illness amid an outbreak of gastroenteritis at a team hotel.

Tori Bowie dived across the line to take gold in the 100m on Sunday and her fall left her with injuries that forced her to withdraw from the 200m. United States of America Track and Field said her condition would be monitored ahead of the 4x100m relay at the weekend.

Conseslus Kipruto followed up his 3000m steeplechase triumph at Rio 2016 by taking the gold dethroning four-time defending champion Ezekiel Kemboi, who had previously said he would retire after his tilt in London.

Just minutes after retaining his 400m world title, Van Niekerk was already casting an eye on adding the title over the half-lap - an event which Makwala will take no further part in having missed his heat.

"It is amazing to win the world title. It is a blessing. I hope the fans enjoyed that. I'm used to the lactic [acid in my legs] but I need a few minutes to recover from that effort and I'll be fine," said Van Niekerk.

"I've got a good team who will help me recover well for the 200m and I'm looking forward to that."

A time of 43.98 seconds was enough to secure glory, with Steven Gardiner taking silver and Abdalelah Haroun becoming the first Asian medallist in the event by finishing third.

Although Bowie did not feature, the other two medallists from the 100m began their bid for another podium place in the 200m with routine runs in the heats.

Schippers, who finished third in the 100m, coasted down the straight and qualified fastest with a time of 22.63secs, while Ta Lou - the silver medallist on Sunday - won the sixth heat.

Shaunae Miller-Uibo is also bidding for a double having made the final of the 400m and she had no trouble in booking her place in the semi-finals.

Her condition will continue to be evaluated to assess her readiness for the 4x100 relay. (2/2)

Kemboi shelved his retirement plans after being stripped of the bronze at Rio 2016 for stepping outside of the track limits, but he was unable to claim a medal in London as Kipruto confirmed a changing of the guard.

The 22-year-old overtook Evan Jager - who finished third - on the back straight during the final lap and held off Soufiane Elbakkali while celebrating as he approached the finishing line.

Kipruto showed no sign of the ankle injury he revealed was bothering him after the heats, while Kemboi ran out of gas on the final lap and slipped down to 11th.

Kipruto is the first world youth champion to win the 3000m steeplechase at the World Championships.

With reigning Olympic champion David Rudisha unable to defend his 800m world title due to a quad injury, Nijel Amos was tipped as the leading contender for gold.

However, Amos missed out on a medal - capping a miserable night for Botswana with Makwala denied his place in the 400m final - after Frenchman Pierre-Ambroise Bosse launched a stunning attack into the final bend to take the glory with a season's best time of 1:44.67secs.

Who's the boss? Pierre is the boss!

There was another medal for the European nation in the pole vault, but Renaud Lavillenie could only manage bronze behind new world champion Sam Kendricks and silver medallist Piotr Lisek.