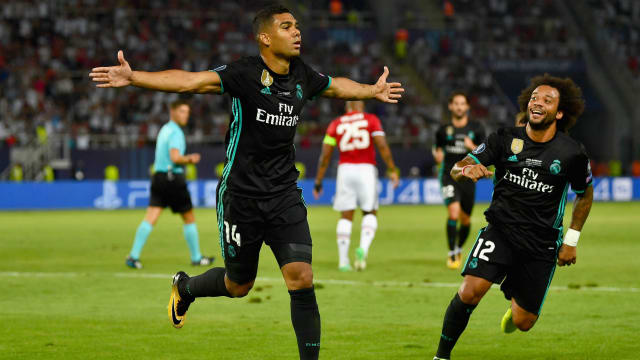 Real Madrid claimed the UEFA Super Cup with a 2-1 victory over Manchester United in Skopje on Tuesday.

Goals from Casemiro and Isco secured a fully-deserved triumph for the Champions League holders, who have now won the trophy three times since 2014.

Romelu Lukaku halved the deficit on his competitive debut, but the Europa League winners looked well short of matching Madrid for much of the encounter in a hot and humid Philip II Arena, where drinks breaks were required.

United beat Madrid on penalties after a 1-1 draw in the International Champions Cup last month, but they were second best for the majority against Zinedine Zidane's side, for whom Gareth Bale started and Cristiano Ronaldo made a late cameo appearance as a substitute.

Jose Mourinho handed first competitive starts to Lukaku, Nemanja Matic and Victor Lindelof, but it looked unlikely that he would celebrate a win over his old club from the moment Casemiro broke the deadlock after 24 minutes.

Isco's superb second put Madrid in control in the second half and, although Lukaku gave United some hope of a comeback, Zidane's side held firm to win their sixth trophy since the Frenchman took charge last January.

66 - Real Madrid have scored in their last 66 games in all comps, the longest ever run by a team from the top 5 European leagues. Infallible

United looked the more settled in the early exchanges, but it was Madrid who came closest to breaking the deadlock, with Bale - heavily linked with the Red Devils of late -  prodding a volley over from six yards before Casemiro rattled the crossbar from a Toni Kroos corner.

Madrid were slowly taking control of proceedings and they made the most of their superiority - and a debatable offside decision - after 24 minutes.

Dani Carvajal, given far too much space 30 yards from goal, clipped a fine pass into Casemiro's path and the Brazilian steered a fine first-time finish into the bottom-right corner from 12 yards out, although replays showed he had strayed just beyond the United defence too early.

2 - Casemiro has scored eight goals for Real Madrid (all comps), the last two coming in his last two games, both finals. Bull. pic.twitter.com/n3bKrvGIZx

David de Gea saved well from a low Karim Benzema effort, as Madrid looked content to sit back and hit United on the break towards the end of the half, with Mourinho's men unable to fashion any service for Lukaku aside from a deep cross that he headed straight at Keylor Navas.

Mourinho introduced Marcus Rashford for Jesse Lingard at half-time, but Madrid threatened a second more or less from kick-off, with De Gea making a terrific one-handed save to keep out Kroos' rasping effort from 20 yards.

But De Gea was helpless against Isco after 52 minutes, the Spain international playing a simple one-two with Bale that carved the United defence in two before slotting the ball beneath the goalkeeper and into the net.

United responded immediately with their best chance of the match, Paul Pogba's header bringing a fine reaction save out of Navas before Lukaku, who was offside, blasted over the crossbar on the rebound with the goal gaping.

Bale hit a shot off the underside of the bar as Madrid pushed confidently forward, but Lukaku grabbed a lifeline for United when he tapped home after Navas parried Matic's shot straight into his path.

Navas made a brilliant stop to deny Rashford one-on-one before De Gea made a stunning save to keep out Marco Asensio's effort, but Madrid held firm in seven minutes of stoppage time to claim the trophy and lay down a marker to the continent.