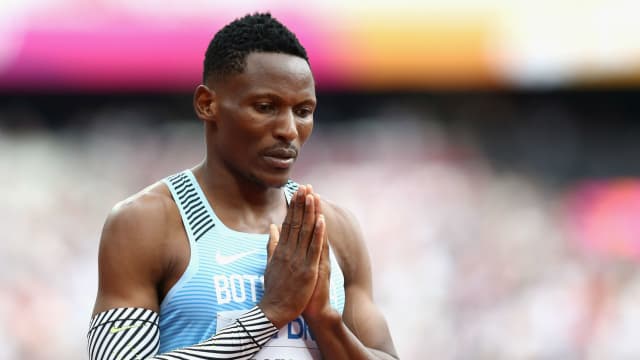 Isaac Makwala hopes to be given the all clear to run in the 400 metres final at the IAAF World Championships on Tuesday after missing the 200m heats due to food poisoning.

Makwala arrived in London looking to upstage Wayde van Niekerk in the 200m and 400m by becoming the first man to achieve the double at a major championship since Michael Johnson in 1996.

The pair both eased into the 400m finals on Sunday, but only Van Niekerk took to the track for the start of the 200m competition 24 hours later.

Makwala was absent from heat five and as a result is a massive doubt for Tuesday's 400m final, giving Van Niekerk a great chance to take centre stage.

"Bad news guys," he wrote on his Facebook page. "According to IAAF medics I am apparently suffering from food poisoning which has affected several other athletes in the athletes' hotel.

And he is not the only one struggling after Irish 400m hurdler Thomas Barr was forced to miss his semi-final on Monday.

"I wasn't feeling great yesterday evening and later in the night I was hit with a bad bout of gastroenteritis," Barr said in a statement via Athletics Ireland.

In a statement the IAAF confirmed there had been an outbreak of gastroenteritis, and that the athletes affected were being looked after by medical staff.

It read: "There have been a number of cases of gastroenteritis reported by team members residing within one of the official team hotels for the World Championships.

"Those affected have been supported by both team and LOC medical staff, in addition we have been working with Public Health England to ensure the situation is managed and contained.

"As a result, further advice and guidelines have been issued to team doctors and support staff - standard procedure for such an occurrence where a number of teams are occupying championship accommodation."