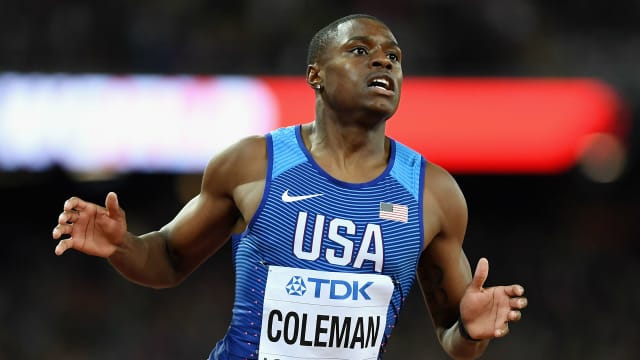 Christian Coleman proved himself to be one of the leading young sprinting talents with a silver medal in the 100 metres at the IAAF World Championships, but he almost followed a path into American football.

Coleman beat Usain Bolt twice in one day as the Jamaican, an athletics legend having claimed eight Olympic golds and 11 at the Worlds, had to settle for bronze in the final 100m race of his career on Saturday - long-time rival Justin Gatlin taking the title.

He represented the United States at the Olympics last year and clocked a world-leading 9.82 seconds in the 100m in June, but it could have all been very different for the 21-year-old.

A running back or a cornerback during his time in high school, Coleman believed American football would be his way into college. Ultimately, the Atlanta native picked the track over the gridiron.

"I played running back. I played in the slot and I played corner as well. I'm pretty good. I got a highlight tape if you want to check it out," he joked.

"In high school I thought football would be my ticket to college and I could very well have been doing the football thing right now, but you've just got to follow God's plan and he wanted me to run track at the next level.

"I did that and it's turned out to be a great decision."

Coleman runs for the Volunteers of the University of Tennessee and felt the track programme available was better for him than offers to play football at a lesser institution.

"It just comes down to paying for school and what's the best situation for you. I had to make those kind of hard decisions," he said.

"I had opportunities to go to some really small schools and play football at lower programmes and, I won't say it's a hard life, but it's definitely different from being at a SEC [Southeastern Conference] calibre school.

"I had plenty of offers to go and run track and so I just decided to take that opportunity instead of through the football route."

An example of what Coleman could offer to a football team was provided when the Volunteers posted a video of the sprinter beating the NFL Combine's 40-yard dash record of 4.22 seconds set by John Ross in March.

The clip of the 21-year-old going one tenth faster made waves in the United States, but he is insists he was not trying to show Ross up and wanted to highlight the talent that exists in track and field.

"It was just about getting a lot of publicity for the University of Tennessee, the track team and just track and field in general, to show people that we are great athletes," said Coleman.

A lot of talk about 40-yard dashes this weekend, so we asked the fastest man in the NCAA @__coleman to run one. pic.twitter.com/CpgWYvqnCI

"People don't realise the amount of work we put in and the kind of high calibre athletes we are. World-class sprinters, we really do have a talent and I think that gave people an inside look at that.

"It wasn't necessarily geared at John Ross at all. The media people at Tennessee just wanted to see what I could do, it was just kind of a fun thing.

"I didn't think it would blow up like it did. They made a video about it and put it out a month later and it really took off.

Success in the 4x100m relay at the weekend would further underline Coleman made the right decision in picking the track.